Imagine a world where a small fertilizer company can assign an absurd amount of money ($113 million) toward “marketing related expenses” to over 1,100 distributors who own or control over 26,000 claimed retailers – and then give little to no detail about who or where these distributors and retailers are.

Welcome to the world of China Green Agriculture (NYSE:CGA).

In our initial report on China Green Agriculture, we announced that one year of time-lapse video surveillance of CGA’s high margin Jinong fertilizer factory showed it had only shipped out around 1/10th of the tonnage reportedly sold in CGA’s SEC filings. Fertilizer shipments from CGA’s Gufeng factory also appeared lower than the tonnage sold per SEC filings, albeit with data gathered on a much smaller number of days filmed.

We then exposed CGA’s bizarre 2014 reclassification of $41 million of property, plant, and equipment (PP&E) on its 2012 and 2013 balance sheets to marketing related deferred assets. As if that wasn’t enough, CGA invested another $72 million in marketing related deferred assets in fiscal 2014, bringing the combined investment to $113 million. We questioned whether any of this investment was real, and we suggested it could merely be a way to move fake cash off of CGA’s balance sheet. As of June 30, 2014, CGA had almost no cash left on its balance sheet (after deducting $25.7 million of customer deposits).

On the fiscal Q2 2014 earnings conference call held February 10, 2014, investor Peter Siris was the first to ask CGA management for an explanation of the approximately $60 million invested (as of December 31, 2013) in marketing related deferred assets (Note: this amount does not even include the $41 million of 2012 and 2013 PP&E that CGA later reclassified as marketing related deferred assets in its 2014 10-K).

CEO Li Tao responded to Mr. Siris’s question by claiming that the investment was to establish a vast network of CGA branded retailers “in every village:”

Peter Siris: You spend 60 million dollars in building up this franchise network. What is that for? Opening up stores? Explain to me where that money is, and when we should see a return from that, because, if you are spending that money, you are planning to see better business in the future, right?

Peter Siris: Can you give us some guidance on that? When do we see a return to us?

CEO Li Tao: (In Chinese) I think everyone should understand it’s marketing. Of course, our marketing is not putting advertisements on television and such. It’s more about building our exclusive stores in every village, located in front of the doors of our end users.

CFO Ken Ren: First of all I like to clarify that the 60 million dollar amount is the total amount we invested to build or to develop the franchising network. Instead of heavily putting commercials and advertisements on TV networks, over the television network, what we did, our focus is to penetrate and build a widely accessible network to cover the remote area including the countryside and rural villages where the real users and customers can have easier access to our products broadly.

CFO Ken Ren: Our goal, our vision for these franchise networks is to allow, to make it feasible for our end users, the less sophisticated farmers to be able to see the brand awareness, to see it… [technical difficulties in the call] Sorry for the technical glitch. We are back. We are coming back. I’m gonna resume what I just said and continue. So our vision, our goal from these franchise networking development campaign is to make it feasible for our very end product users, the farmers, from rural village in China, and those unsophisticated farmers would be able to see the image of the company’s products, the company’s brand, when they out of their house, when they walk into the road and the street in their town in their village, and they make it easier for them to carry, to buy, our products easily back from the retail outlets, from the franchise outlets, back to their home, to use, to consider it, to study it at their home, and they can make it feasible or easier for them to carry their products from their house to their farmland. This is the vision of why we are doing this, and it’s the long-term goal, when these franchise networks take effect.

A recording of this portion of the Q2 2014 conference call can be found here.

CGA gives few details about its distributors’ retail network in its SEC filings, despite having surreptitiously invested $113 million in it over the last three years (including the $41 million of 2012 and 2013 PP&E reclassified in 2014).

Since the launch of the Pilot Program in January 2010, we have worked closely with our existing distributors who designate over 26,175 retailers, namely the “China Green Agriculture Retailers” for fiscal year ended June 30, 2014. We have entered into agreements with these retailers to prominently display “China Green Agriculture Authorized Retailer” on their exhibits, and have well-positioned standardized shelf and product displays in their retail stores. In addition, we provide the retailers with educational materials on proper product use and billboard ads with our product logo to attract target farmers.

CGA has provided no evidence to support the existence of this vast network of CGA branded retailers, leaving investors on their own to determine whether CGA’s retailers exist. Few investors have the capability to perform even basic due diligence into this matter. Those proficient in Chinese know that simple web searches turn up little evidence of CGA’s 26,175 branded retailers.

$113 million has been spent for this so-called network with little online presence? How is this even possible? Common sense would tell us that this massive expenditure should have a much bigger online presence if only by accident.

On CGA’s Techteam website we found a December 11, 2013 interview of Hongli Qi, a graphic designer who worked for Jinong, in which she claimed:

“The exterior design of the few hundred Jinong exclusive stores, and direct selling stores were all designed by me.”

In the interview, Ms. Qi uses the phrase “exclusive stores,” which is the same term that CEO Li Tao used when answering Peter Siris’s question regarding use of the tens of millions of marketing investment dollars. Putting signboards on a few hundred stores in China obviously does not cost a fraction of $113 million dollars.

(Note: CGA appears to have removed the link to the interview of Ms. Qi from its Techteam website. The cached copy of the interview is still available on Baidu here.)

Furthermore, CGA’s newest Chinese website, 900cga.com, has a page titled “Distribution Network.” A screenshot of this web page is shown below. Even non-Chinese readers can see that the links to maps of the distribution network in 41 Chinese provinces and cities appear to be empty. When you click on the place links above the map on most pages, a single blue dot appears centered on most of the maps with no contact details. Only the Shaanxi and Beijing maps show any contacts at all, however none of the contacts are real.

The Shaanxi map shows 3 blue dots, 2 of which show the same phone number, as shown below: 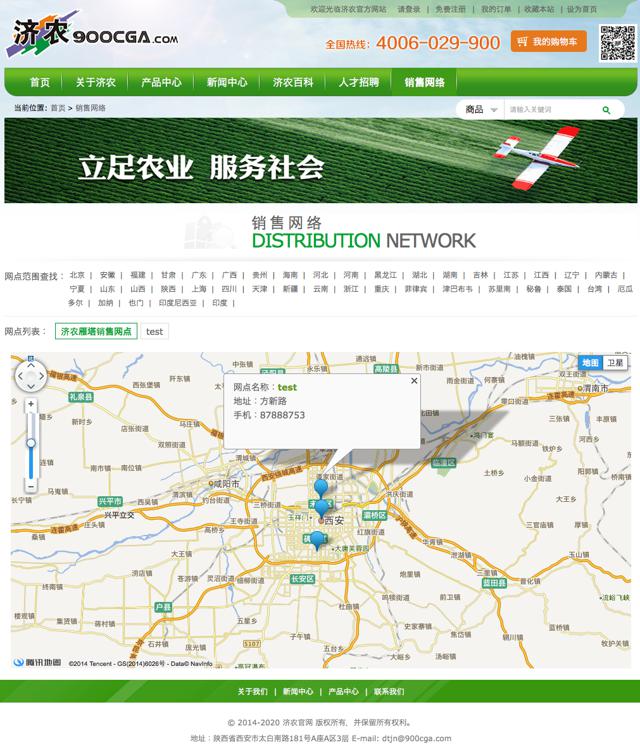 The phone number is the same for the second Shaanxi location: 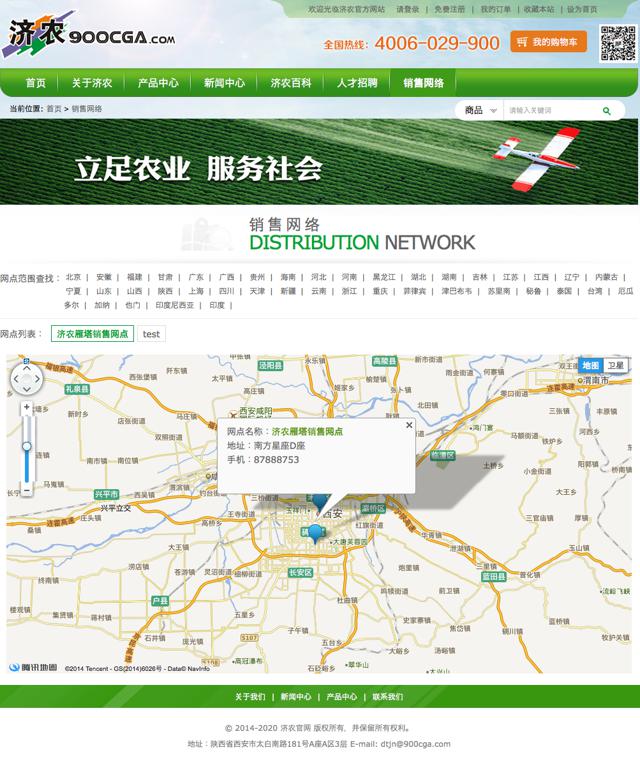 We called this number and were told by the person who answered that it belonged to the website development company that built CGA’s new website.

The map of Beijing shows a single location with a fake “11111111” phone number with a Chengdu area code, as well as an obviously fake Beijing address ending in “asdasd“: 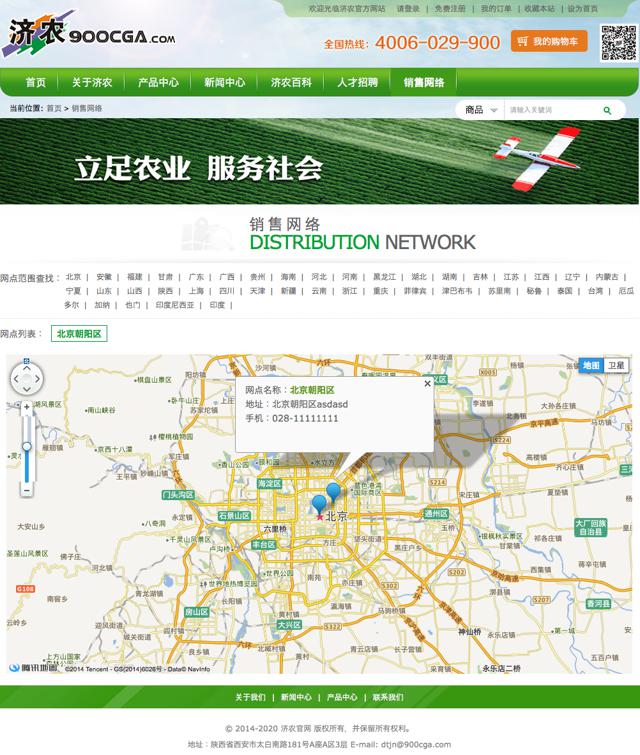 Here we are expected to believe that CGA has the expertise and infrastructure to execute payouts of vast sums of money and coordinate the development of over 26,000 “franchisees” but it cannot simply provide an accurate list of these locations on its website. Wouldn’t CGA have to have a name, address, and phone number, for each franchisee that they have signed agreements with?

From this, we have reached what we believe to be a fairly obvious conclusion: CGA’s claim to have invested $113 million in marketing related deferred assets, presumably to build out a network of 26,175 CGA branded stores, is doubtful at best and another example of a pure sham at worst.

We challenge CGA to provide a directory of its branded stores so that investors can confirm for themselves whether the stores really exist, and then draw their own conclusions as to whether CGA really invested $113 million into building out its franchise network.

Once again, we are doubtful CGA will respond, but for some blanket denials and perfunctory “anti-short seller” language.

To date, CGA has merely rejected our allegations without presenting any evidence to disprove our findings. In its press release, CGA bragged about its transparency, but thus far it appears to be following the same opaque approach it used when dealing with the Alfred Little and J Capital allegations in 2010 and 2011. This approach did little to appease those skeptical of the company, and eventually led to Brean Murray cutting its rating to “sell,” citingCGA’s failure to provide evidence refuting the short sellers’ reports.

On October 7, 2014, in what seemed like an act of transparency to some, CGAannounced it would hold “special investor days” in Xi’an and Beijing on October 15 and 17, 2014, respectively. CGA asked investors wishing to attend to RSVP the company’s corporate secretary, Ms. Ran Liu, by October 12, 2014. We understand from several sources that CGA is not replying to investors who have emailed Ms. Liu to confirm their interest in attending the event. CGA’s investor days appear to be open to only close friends of the management. This is far from adding transparency – the investor days appear to simply be another sham.