On October 7, 2013 L&L Energy (LLEN) issued yet another misrepresentative press release, in which the company tried to attribute nearly half of its fiscal 2013 coal-washing revenue to a second previously undisclosed facility that LLEN refers to as “TaiFung”. The press release states:

A simple review of LLEN’s public filings shows this is a total misrepresentation. Based on LLEN’s 2013 10-K, “TaiFung” owns the Hong Xing Coal Washing Factory, and Taifung itself is only a wholesale coal marketing and distributing company:

“On November 30, 2009, TNI acquired 100% of the equity interest in SeZone County Hong Xing Coal Washing Factory (“Hong Xing”), which was subsequently transferred to Tai Fung (as defined below), another subsidiary of the Company.”

“On March 8, 2011, the Company entered into an Operating Agreement to invest up to US$3,063,069 (RMB 20,000,000) in a newly established entity, Tai Fung, a Chinese company established in SeZone Country, Yunnan Province, PRC. TaiFung is a marketing and distributing company of coals throughout China and had yet to begin operation as of April 30, 2011.“ 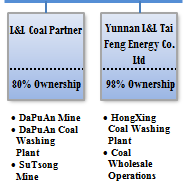 Never, in any of LLEN’s public filings, is there any mention of a TaiFung coal washing facility.

“Since DaPuAn only washes its own coal from its own mine, we only listed the raw coal under the Mining Segment. We have considered this is part of the total service provided within DaPuAn before the coal was sold to customer. There was no washing reported separately.”

Our visits to TaiFung at the end of 2011 and again in June and July of 2013 showed it is impossible that TaiFung could have a coal washing business at either its business address or its registered address we visited.

Our pictures of TaiFung’s business address we visited are as follows:

The following pictures are of TaiFung’s registered address: 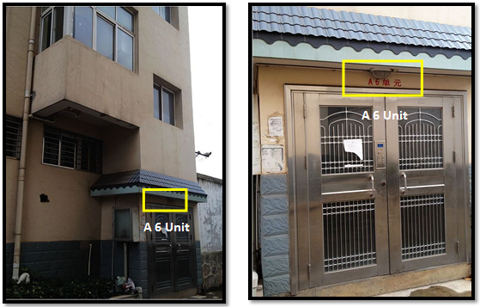 Neither TaiFung’s business address nor its registered address we visited has a coal washing plant on their premises. Therefore, based on all of the above we conclude that LLEN’s press release claim of operating a “TaiFung” coal washing facility is false and misleading.

Furthermore, Clayton Fong Acknowledged on the Fiscal 2013 Conference Call that LLEN Coal Washing Revenues are Only Generated from the Hong Xing Facility

On the July 31, 2013 conference call, Clayton Fong attributed all 470,000 tons of coal washed in fiscal 2013 to the Hong Xing facility and admitted that Hong Xing is the only (coal washing facility) LLEN would segment separately:

“…The coal washing at Hong Xing has been relatively steady year-over-year. 2012 to 2013 we washed about overall 77,000 tons in that segment and that compares to about 62, 63 – excuse me, let me get the actual tons right: We went from about 400,000 tons to 470,000 tons year-over-year. That area has been a little more steady. I don’t have the breakdown between the two [facilities], but I know because, I would expect and I’ll make sure of this, but I believe that’s all of the Hong Xing facility, because those numbers exclude the Ping Yi mine, which was a split facility and they also – and Hong Xing will be the only facility we would count separately. The DaPuAn mine washes only its only coal, so it tends to just get lumped in with its coal sales, not a separate breakout on washing…“

Source: GeoInvesting transcript. You can listen to the audio clip here.

What About the HunTai Facility that LLEN Claimed TaiFung Will Operate?

On July 10, 2012 LLEN issued a press release disclosing that TaiFung would operate a coal-washing facility called “HunTai”, then in trial production.

However, the press release clearly states that “L&L will receive a management fee for operating the plant and can earn revenues from wholesaling the washed coal.” LLEN estimated its future wholesale revenues and earnings from operating HunTai as follows:

“The agreement is expected to generate approximately $63 million of additional wholesale revenue and $5.9 million in net income, based on coal pricing of $160 per ton. Additionally, L&L will earn a management fee of $0.5 million for the next 12 months of operation.”

Therefore any revenue from selling coal washed at the HunTai facility (if there is any) would be booked as wholesale revenue, and not included in LLEN’s coal washing revenue reported in its 2013 10-K.

We can only conclude that either LLEN fabricated its TaiFung coal washing claim, or that possibly LLEN changed the accounting treatment of HunTai washed coal revenues from the treatment disclosed in the press release announcing the original agreement. Regardless of what percentage of fiscal 2013 revenues LLEN now wants to attribute to Hong Xing, it is a fact that the only remaining staff on site as well as the local government officials we interviewed were quite certain that Hong Xing shut down in June 2012.

While we will not share the video recording of our lengthy interviews, (the NASDAQ and SEC need time to verify the information with its sources), some key points are as follows:

The decline and subsequent closure of the Hong Xing facility were corroborated by our interviews with the only remaining staff as well as by the tax record that showed only a miniscule tax paid in the first half of 2012 and no tax paid (or even filed) to the local tax bureau since June 2012.

In fact, we strongly believe that LLEN’s false disclosure of the “winding down” of Hong Xing’s operations in an August 19, 2013 strategic update was prompted by LLEN’s fear that certain participants in the July 31, fiscal 2013 conference call had discovered the 2012 closure and were asking probative questions regarding the washing trend in the current quarter (ending July 31, the day of the conference call!). Consider the following very uncomfortable questions asked:

“How much revenue is generated and how many tons of coal was washed at your Hong Xing facility in Q4 and how was the trend in the Hong Xing coal washing in the current Q1 compared to Q4.”

“…can you at least comment on the trend from Q1 to Q4 in the [Hong Xing] coal washing, can you give us a little color on the trend?”

“…referring back to Hong Xing. Would you consider that given in Q4, excuse me, in Q1, in this current quarter that they are trending up at the Hong Xing coal washing facility. Is that safe to assume from what you, from your answer, your last answer?

On August 19, 2013 LLEN disclosed it was “winding down” the Hong Xing operation. In the current October 7, 2013 press release LLEN clarified by claiming “Hong Xing ceased operations as of June 30, 2013 and produced no revenue in July 2013.”

GeoInvesting simply asks: Why was Clayton Fong not aware of the supposed June 30th closure, one month later, on the fiscal 2013 July 31 conference call? Why did Clayton Fong respond to the repeated questions posed to him on July 31st that Hong Xing’s business was “trending up”?

In its October 7, 2013 press release, LLEN simply claims “Hong Xing pays taxes to the proper Chinese authorities for its sales.” This statement proves nothing. LLEN then proceeds to challenge GeoInvesting’s findings from the Shizong County Local Tax Bureau.