THT Heat Transfer Tech Inc. (THTI) is a company that we have followed for a couple of years.

Based on previous on the ground due diligence, including SAIC analysis, we believe THTI to be a legitimate U.S. listed business in China that trades with the same discount that a lot of questionable Chinese companies do. Not only do we believe this presents a buying opportunity, but news uncovered just today out of China also leads us to believe that there’s an opportunity for U.S. investors to take advantage of some news arbitrage.

As we disclosed to our Premium members earlier this morning, this article in the Chinese Financial Media, published just today, states that THTI has engaged in an agreement with a Chinese government backed Nuclear Power Group (Zhong Guang He Ji Tuan).

The article states the following: 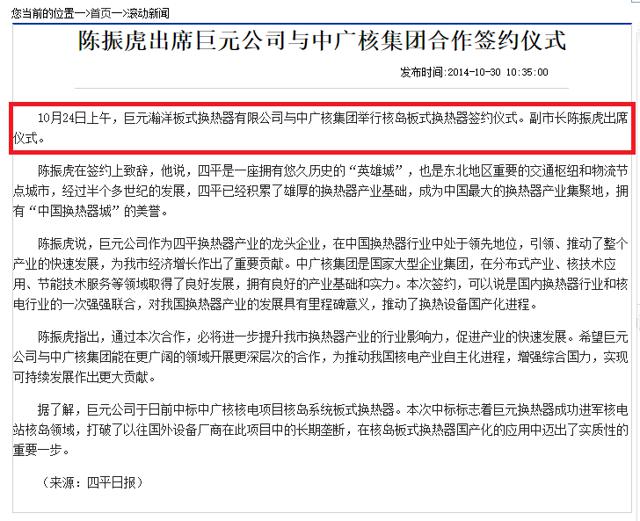 Which is translated as:

The content of the agreement has not been disclosed, but the fact that THTI is working with China General Nuclear Power (“CGNP”) could imply a future contract regarding current and future power plants between the two entities. CGNP is the biggest power plant developer in China and has just submitted its application to go public in Hong Kong on the Hang Seng. Its IPO will be the second biggest IPO of any Chinese company outside of China (second only to BABA). The IPO is trying to raise $3 billion.

In addition, the company’s recent revenue guidance of $22 million to $28 million would constitute an impressive 70% gain (at least) from the same quarter last year, where the company posted revenue of $13.7 million.

With the help of the company’s new arrangement, we believe the company could produce EPS of $0.20 this year, which at a modest 15x P/E should put their stock price close to $3.00, representing over 100% upside from current levels. The company’s book value per share is $3.15.

One of the issues with THTI in the past has been the inconsistency of the company’s quarterly. We believe that today’s agreement could provide a more consistent and predictable growth curve.

In order to improve valuation past our current assumption, the company could look to address its DSO for receivables, which we see as one potential caveat, should it not improve. We think the company’s DSO number may be typical for its industry, but we’re continuing our due diligence on THTI and will post updates accordingly. If the company meets its revenue guidance in the coming quarter, we expect the DSO number to decrease.

While we don’t advocate blindly assuming this type of valuation for all U.S. listed Chinese stocks before performing your due diligence, we have personally visited THTI as recently as this summer. Our most recent visit to the company indicated an uptrend in business from our prior visits.