After our initial short thesis article on American Heritage (AHII), in which the subject matter revolved around the motivation for a pump campaign and the headwinds the company was facing in light of the competitive landscape of the e-cigarette industry as well as almost certain government regulation, we received a compelling note from a reader that we could just not ignore. Here is part of that note:

“…you’re dead on right in your article, it’s even worse than you project…”

The following are excerpts from an email exchange between GeoInvesting and the above-mentioned individual familiar with the AHII story (anonymous for safety reasons) who contacted us regarding the identity of Cash Anderson.

GeoInvesting: Hey, thanks for contacting GeoInvesting after reading our April 2, 2014 Seeking Alpha short thesis article on AHII. We are particularly interested in your findings that Cash Anderson is actually Daryl O. Anderson who has been fined by the SEC in at least two past fraud cases.
Are you 100% certain that Cash is Daryl?
Do the either the CEO or CFO of AHII know that Cash is Daryl?

Although we were already short AHII, this new material just strengthened our opinion that the company’s shares are heading much lower.

Other content in this email exchange has been omitted to protect the safety of our source and maintain the integrity of future investigations on AHII.

Here is an open question to management: Is Anderson, of Anderson Levine LLC, mentioned as recipient of AHII shares in your 8K reverse merger filing, actually Daryl Anderson (as we believe to be the case) party to this 2009 SEC claim:

“The U.S. Securities and Exchange Commission has filed a scalping lawsuit against Daryl Anderson, 41, a former broker from Nevada. The SEC claims that Mr. Anderson recommended that customers buy a pink sheets company, Cloudtech Sensors Inc., at the same time as he was selling it. He allegedly made $930,000 in illicit profits from the scheme.”

Or the same Daryl Anderson involved:

“in an unregistered offering of CMKM Diamonds securities on behalf of a brokerage customer involved in a stock manipulation scheme?“

To reiterate, on April 2, 2014 we published a short thesis article about AHII on Seeking Alpha.

“On August 23, 2013, the Wall Street Journal reported that the FDA is considering a ban on online sales of electronic cigarettes, although the FDA clarified that any such intention would be part of the agency’s rule-making procedures. If the FDA implements such a ban, our financial results would be materially adversely affected, as approximately 50% of our revenue is derived from online sales.“

On April 3, 2014 we issued a follow up note to GeoInvesting premium members, expanding on a tweet by Fraud Research Institute (Twitter, Seeking Alpha) pointing out that AHII’s corporate status with the Nevada Secretary of State is currently in Default.

Who is Cash Anderson?

We have continued to perform DD on AHII and found some interesting information about one of its characters. An inconsistency in two AHII reverse merger filings caught our attention. The first reverse merger 8K filing on August 30, 2013 stated that three individuals/entities were principals to the e-cigarette assets that now reside at AHII and that they owned 75% of the company:

“On August 28, 2013, we issued a total of 15,300 shares of our newly designated Series A Convertible Preferred Stock in connection with the Asset Purchase Agreement that we entered into with American Heritage LLC and its principals Anthony Sarvucci, Vincent Bonifatto and Anderson Levine LLC.

On August 28, 2013, Joseph Isaacs agreed to transfer 36,000,000 of his shares of common stock to Anthony Sarvucci, Vincent Bonifatto and Anderson Levine LLC for a total purchase price of $36,000.

As a result of the purchase of shares, along with their ownership of Series A Convertible Preferred Stock and the cancellation of Joseph Isaacs shares, Anthony Sarvucci, Vincent Bonifatto and Anderson Levine LLC are now in control of 75% of our issued and outstanding voting securities.”

We searched the Nevada Secretary of State website and found that an individual that goes by the name of Cash Anderson is/was an officer of AHII. 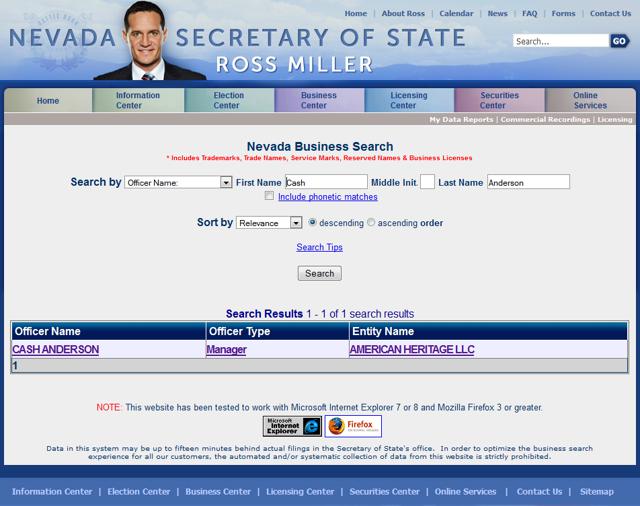 A simple on line search reveals that a Cash Anderson was involved with another e-cigarette company called, Cigirex:

“Cigirex will offer a HelpLine to Smokers with a new Cigirex Pledge notes Cash Anderson, Executive Coordinator for Cigirex.”

So we are confident that Anderson of Anderson Levine is Cash Anderson.

On February 24, 2014 AHII filed an 8K/A which discussed amended terms of the reverse merger filing. We found it peculiar that Anderson Levine LLC was no longer disclosed as a recipient of shares.

“In furtherance of our new business direction, on August 28, 2013, we entered into an Asset Purchase Agreement (the “Purchase Agreement”) with American Heritage LLC and its principals Anthony Sarvucci and Vincent Bonifatto. Under the Purchase Agreement, we acquired certain assets and intellectual property related to the electronic cigarette business in exchange for 15,300 shares of our newly created Series A Convertible Preferred Stock.

On August 28, 2013, Joseph Isaacs agreed to transfer 36,000,000 of his shares of common stock to Anthony Sarvucci and Vincent Bonifatto for a total purchase price of $36,000. The source of the consideration paid to Joseph Isaacs was the existing funds of these new shareholders.

As a result of the purchase of shares, along with their ownership of Series A Convertible Preferred Stock and the cancellation of Joseph Isaacs shares, Anthony Sarvucci and Vincent Bonifatto are now in control of 75% of our issued and outstanding voting securities. “

Why Do Filings NOW Exclude Reference to Anderson Levine LLC?

We think the answer is obvious. A key black hole in the Pump and Dump game is the lack of disclosure of the puppeteers pulling the strings and pocketing millions of dollars through:

This black hole can intentionally be created when certain players want to go unnoticed due to past involvement in fraudulent behavior. And we believe this to be the case with Cash Anderson, an opinion in part reinforced by the individual who told us that Cash Anderson is actually a guy that used to go by the name of Daryl O. Anderson. Daryl Anderson has a checkered past, including being fined by the SEC. Once for a stock scalping scheme related to Cloudtech Sensors Inc., and once for a stock manipulation scheme related to CMKM Diamonds, Inc.

“The Commission’s complaint alleged that, among other things, from March 2003 until May 2005, Anderson improperly sold more than 259 billion shares of unregistered securities of CMKM Diamonds, Inc. in 569 separate transactions. The complaint also alleged that this unregistered distribution generated more than $53.3 million in proceeds, and yielded approximately $2.3 million in commissions for Anderson.”

“On April 7, 2008, the SEC filed a civil injunctive action against CMKM Diamonds, Inc., its former Chairman and CEO, Urban Casavant, and 12 other defendants involved in the alleged illegal issuance and sale of unregistered stock of CMKM Diamonds, Inc., purportedly a diamond and gold mining company located in Las Vegas, Nevada. The SEC charged all of the defendants with violating the registration provisions of the federal securities laws. In addition, the Commission charged CMKM and Casavant with violating the antifraud and various reporting, record keeping, and internal controls provisions.

On June 23, 2009, the federal district court in the District of Nevada granted the SECÃ‚’s motion for summary judgment against defendants John Edwards, Daryl Anderson, and Kathleen and Anthony Tomasso.

36. Anderson, directly or indirectly, singly or in concert with others, in connection with the purchase and sale of securities by use of the means and instrumentalities of interstate commerce and by use of the mails has: A) employed devices, schemes and artifices to defraud; B) made untrue statements of material facts and omitted to state material facts necessary in order to make the statements made, in light of the circumstances under which they were made, not misleading; and C) engaged in acts, practices and courses of business which operate as a fraud and deceit upon purchasers, prospective purchasers and other persons.

Excerpt from a 2009 CMKX Forum Discussion:

“The SEC filed its current complaint against Mr. Anderson on Sept. 10, 2009, in the District of Nevada. In it, the regulator alleges that he ran a scalping scheme between June, 2007, and January, 2008 (about two years after the CMKM scheme, which ended in May, 2005). The SEC says the victims were his former brokerage clients, who had been his loyal customers during his 14 years as an investment adviser.

When his brokerage career ended in March, 2007, Mr. Anderson started working independently, recommending stocks to investors and trading their accounts for them, the complaint states. His customers viewed him as an adviser and a friend, and they trusted and followed his advice, the SEC says. He provided the investors will full service, even opening their trading accounts for them at a brokerage of his choosing. The complaint alleges that he entered their personal information on-line and held their account numbers and passwords.

Mr. Anderson started pitching Cloudtech to these investors in June, 2007, when the stock traded at 95 cents per share, the complaint states. He told them it was an up-and-coming company, and investors could double or triple their money quickly.

On the first day of the scheme, Mr. Anderson allegedly had his clients purchase 70,000 shares at prices that escalated from 95 cents to $1.75 per share. In some cases, he instructed his customers to place orders, and in others he used his control over their accounts to directly place the orders. This buying accounted for 44 per cent of the volume that day. At the same time, Mr. Anderson secretly placed sell orders in his personal account, the SEC says. His sell orders were significantly above the market, at prices between $1.50 and $2. As the stock moved up, he sold 20,000 shares, the complaint states.

We look forward to the company addressing our findings.