Monster Worldwide Inc. (MWW) – An Out Of Favor and Undervalued Stock With Tremendous Upside

In our recently published article on Demand Media (DMD) we noted that businesses must evolve or die. That is particularly true in the rapidly changing internet space. We all know yesterday’s stars can become today’s dogs. We also know that very few of those dogs become tomorrow’s stars. The GeoTeam has again uncovered a once prominent name that has fallen from grace and is currently trading near its 12-month lows and well below its true value by any reasonable measure. In fact, we believe that if management meets or even comes close to meeting its goals that the company’s stock price could rise 100% from recent levels. That stock is Monster Worldwide Inc. (MWW).

The Street is not just bearish on this name but apathetic, with at least five prominent firms having dropped coverage – seemingly leaving MWW for dead. Astute investors will note that while the Street has shunned MWW and is looking the other way, management has quietly been making the changes and moves necessary for the company to reassert itself and once again become the leader in the job search space.

Monster Worldwide Inc. (“Monster”, “MWW”, or “The Company”) is an online job placement company that operates across the following three reportable business segments:

The Company got its start by taking printed job postings and digitizing them to an online database. This strategy gave Monster the “first mover” advantage in the digital job postings industry and translated to rapid revenue growth and a boost to the Company’s stock price.

However, soon enough other companies realized the opportunity in online recruiting and embarked on building their own online job sites. While some replicated Monster’s generalized approach (CareerBuilder), others tried to segment the market by catering towards a specific job seeker (Dice), aggregate all job listings on multiple sites into one searchable database (Indeed), or resort to social media in order to target candidates (LinkedIn). No matter the approach, all of these competing offerings encroached on Monster’s market share and hurt its profitability. The sell-side lost all hope in the company, citing

“structural risk that the price will not recover to levels seen in previous peaks as newer, less expensive alternatives proliferate…” (Goldman Sachs, April 28, 2014)

“MWW has one of the biggest cyclical risks of the stocks we cover [and citing concern] that MWW is also being impacted by greater competitive pressures” (Citi, January 1, 2012)

In an effort to turn the company around, Monster has introduced a business strategy focusing on three pillars outlined in greater detail during the Company’s May 14, 2014 investor meeting.

As the investment to implement this strategy has already been made and is reflected in MWW’s operating expenses, much of the incremental revenue associated with the turnaround is expected to flow straight to the bottom line. As such, management expects EBITDA margins of 30% to 35% in the next 24 months (versus 16% and 14% EBITDA margins in 2012 and 2013, respectively).

The Proof is in Searchmetrics

A small portion of Monster’s three-pronged strategy has slowly been implemented throughout the company’s three business segments, and further roll-outs of the plan are expected in July 2014 and January 2015. While the changes that have taken place are marginal compared to the eventual transformation that will ensue, monster.com has already seen an uptick in traffic and that was BEFORE the Panda Update!!

As we wrote about in our prior piece on Demand Media , in May 2014 Google released an algorithm update named Panda 4.0 which changed the hierarchy through which various websites appeared in search results. Since the update, Monster’s search engine optimization (“SEO”) ranking has improved significantly from #259 to #185 as evidenced by the graph below:

In addition, based on the latest weekly data following the Panda 4.0 update, monster.com comes up as a top result when people enter “job search”, “interview questions”, “resume example”, “jobs”, “sample resume” or “resume” into an online search:

This is significant for Monster, as according to alexa.com, 17.6% of visits to its website come from search engines. With more search hits, come more traffic, and more revenue.

Monster’s management has been actively repurchasing shares and is likely to continue to do so which we believe provides further upside for MWW’s stock price.

In Q1 2014, the Company repurchased 5 million shares, bringing the total number of shares repurchased under the current authorization to 26 million, or ~25% of Monster shares outstanding at an average price of $5.71. During the last earnings call, management noted that they:

“continue to believe repurchasing shares is an attractive investment and will do so aggressively as appropriate over the coming months.”

We believe that the combination of an altered business strategy, significant traffic increase following Panda 4.0 and an aggressive share buyback program translates into immense upside for Monster’s recent stock price. To put in perspective just how inexpensive MWW is, it was recently trading near its lows with a Price/Revenue ratio of 0.64 and EV/Revenue of 0.78. Career Builder and Snag a Job are competitors but privately held. Dice Holdings (DHX), however, is public. Like MWW, DHX is trading near its lows but has a much higher relative valuation with a Price/Revenue of 1.69 and EV/Revenue of 2.15. Recent employment data indicates the job market is gradually improving. As the job market improves more and more job seekers and job changers will enter the fray, meaning more traffic and revenue for MWW.

So what do we think MWW is worth? Just to be conservative, let’s assume future revenue to be in line with sell-side consensus which actually forecasts a -1.2% year-over-year decrease in MWW revenue to $798 million in 2014 before increasing to $816 million in 2015. Applying a 25% EBITDA margin in 2014 and 30% EBITDA margin in 2015 (management has guided to 30-35% margins in the next 24 months) with a 5.5x FY1 EBITDA multiple and 5.0x FY2 EBITDA multiple (extremely conservative considering that the peer group is trading at 8.4x and 7.3x, respectively), yields a very attractive valuation. 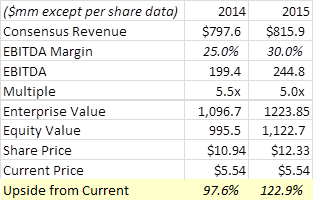 The case detailed above assumes declining revenue in 2014 and only a slight increase in revenue in 2015. However, as we have already discussed, increased traffic to Monster’s websites and strategic changes by the company are bound to lead to higher sales, EBITDA and stock price. In addition, further share repurchases (which are not factored into the above analysis), will further bolster the valuation. Given the multiple ways in which Monster’s stock price can rise above the already ~100% upside implied in a best case scenario, we consider MWW a strong buy.