I have a long position in The Eastern Company (NASDAQ:EML).  I avoided putting capital into it several years prior to GeoInvesting’s May 2017 Call to Action, but it has become one of my favorite stocks in any of my portfolios – so much so, that it resides in two more of GeoInvesting’s premium “Mock Portfolios”. The first is our “Multi-Bagger” Mock Portfolio (created for long-term investors) and the other, our sixth installment of our “Buy On Pullback” Portfolio series (created for short to mid-term contrarian investors). 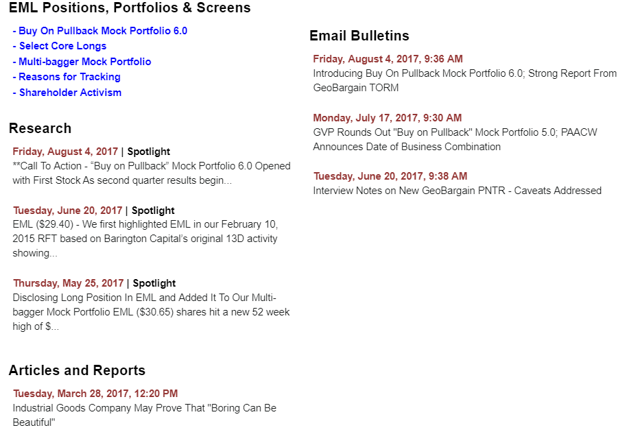 What follows are some of the reasons surrounding our bullish case for EML, plus an update on an acquisition the Company made in April 2017.  You can see our entire original bull case here.

My hope is that you will get to know and appreciate the type of long biased research we have been doing for 10 years and that you consider joining our community at Geo here.

Background on The Eastern Company

I originally wrote a Reasons For Tracking (RFT) article for GeoInvesting Premium Members in 2015, and eventually wrote a more comprehensive research piece on March 28, 2017.  The stock was trading at ~$20.25 at this time.  Our RFT tool gives Geo members an early, quick and dirty look at stocks we are tracking, buying or shorting.  It also helps research driven members begin their due diligence process.

Full blown research articles can take extra time to prepare, so we created our RFT product to deliver to our members timely ideas that may not be fully fleshed out; yet will still provide enough meat on the bone to convey an understanding of the Company’s story and its related risks.

Sometimes, our members buy a stock on the RFT list before we do!

In the spirit of full disclosure, even though we had been comprehensively following and research the stock for years, on May 25, 2017 I communicated to Geo Premium members that I finally went long the stock, even though Eastern Company had increased 52% since our March 28 research piece!

At its current price of between $30 and $31, I still think the stock has a lot left in the tank and that it can deliver value to near-term and long-term investors.  Peter Lynch said it best:

If you get to know me, you will quickly find out that I just love simple, boring stories that are about to become exciting. This often occurs when nondescript microcap and nanocap stocks attract activist investors.

In fact, in April 2017 and subsequent to our published research, management announced it had acquired Velvac, a premier designer and manufacturer of proprietary vision technology for commercial vehicles. As you will see, EML now has a presence in the connected vehicle industry.

The Vacuum Power Equipment Company opened its doors for business in 1934, beginning a long tradition of manufacturing air brake and valve components for heavy trucks. In 1940, the corporate name was changed to “Velvac” in response to the popularity of the company’s Velvet Vacuum Brakes brand. In the mid 1950’s, Velvac began producing a range of “west coast” mirror heads for North American truck manufacturers, becoming an OEM supplier of mirrors to GM in 1956. This started Velvac’s growth and eventual leadership in supplying vision systems to the North American commercial vehicle market. Our product line has expanded over the years and now includes over 4,000 popular vehicle components. As Velvac has grown over its 80 year history, the company’s primary manufacturing facilities have moved and been expanded five times.

At Velvac, we are committed to keeping our customers in the commercial truck, recreational vehicle and specialty vehicle industries at the forefront of safety, aesthetics, and competitiveness.

In order to respond to the increasingly important role of electronics, software and vehicle connectivity emerging vision system technology, Velvac acquired the key assets and operations of Qualnetics, Inc. in Bellingham, WA in 2014, creating a new subsidiary company named Road-iQ to support the technology transformation occurring in the field of vision systems.

Velvac has developed some of the most sophisticated vision systems in the industry. With the addition of Road-iQ and the 5th Wheel Dual Camera System, Velvac has moved into the connected vehicle solution arena to provide real-time blind spot viewing, recorded video data and integrated cameras. These systems provide the driver with dedicated views of blind spots and passing lanes around the vehicle, resulting in an intuitive visual experience that improves safety and reduces the potential for costly and dangerous accidents.

Wow! Not quite as boring anymore! The fleet management (telematics) industry is a hot topic among regulators, as well as investors these days. In the U.S, regulation has been passed that is going to force fleet management operators to adopt certain tools over the next two years. Safety and data analytics are a big focus of regulation.

Out of the gate, Velvac will add ~$60 million in annual sales (an increase of ~40%) and be accretive to EPS in 2018.  Even before Velvac, EML was already comfortably profitable:

On the surface, the GAAP earnings per share (EPS) growth the company reported compared to last year looked weak. However, after quickly digging into the numbers it became clear that GAAP earnings do not tell the whole story. Subtracting some one-time costs associated with the Velvac acquisition reveals that the company grew its earnings by 45%.

The great news is that the full net income contribution from Velvac will kick in in 2018:

After carrying minimal debt, Velvac comes with a nice chunk of debt, taking EML debt to equity to 40% (well above our 20% threshold), but EML is on track to generate over $12 million of free cash flow this year. I think the company is well on its way to generating an annual run-rate EPS well north of $2.00 and creating much more shareholder value. EML should easily be able to service its annual interest expense of $1.2 million. The stock has climbed back up from its post Q2 earnings lows and is just shy of its 52-week high of $31.50.

The Best is Yet to Come For The Eastern Company

I think the best is yet to come.  I expect organic growth to improve and management to make more acquisitions. If you were to ask me what  fair value for The Eastern Company is, my answer would be “much higher than today.”  Microcap investors know that investing in great (not just good) managers is a key ingredient that compounders share. I placed my EML bet based on the long- term vision and track record of management.

Those on the current management team are also placing their bets.  The Chairman of the Board, James Mitarotonda, recently added to his already large stake (528 thousand shares) through his activist fund called Barington Capital when he bought 52,598 shares at $25.90 in a private transaction with another shareholder in May 2017.  August Vlak, a former senior advisor to Barington, was appointed CEO and recently acquired 5000 shares at $25.90 in an open market transaction.

As a kicker, The Eastern Company also pays a dividend. We don’t think it will be long before other microcap investors and institutions will find this stock, especially given the dividend value-add.

As you can see, we are persistent in our approach to research. Companies that enter our radar, like EML, are subject to an analysis that goes far beyond making knee jerk decisions to buy a stock.  We look for long-term value, and as a potential member you can be privy to our search for hidden and misunderstood stories ignored by others.

Again, here is a complimentary look at our full article originally published on March 28 2017.