The first hints of legal trouble at China Finance Online (JRJC) appeared in a December 15, 2014 China’s Tencent Prism magazine special report on the business dealings of the brother of a detained high-level government official. With respect to JRJC, Tencent Prism reported that Ling Wang, a former director of JRJC and close associate of CEO Zhiwei Zhao, fled China in 2014 to escape a corruption investigation. Zhao apparently wasn’t so lucky, as he was reportedly restricted from leaving China at the end of 2014.

In the two trading days following the Tencent Prism report, JRJC shares fell 25%, from $7.62 to $5.70. Disturbingly, JRJC management did not respond to the report, despite the very serious allegations and large decline in the share price.

On March 23, 2015 JRJC reported dismal earnings and its stock fell by 26% from $6.19 to $4.58. Chairman Zhao was mysteriously absent from this important earnings conference call, the first he had missed since July 2013. JRJC provided no explanation for Zhao’s absence, but did provide a quote from Zhao in the earnings release as well as a prepared remark purportedly from Zhao that was read during the conference call.

Matters took another turn for the worse on April 17, 2015, when Caixin Magazine reported the official detention of JRJC independent director Rongquan Leng during a corruption investigation. The article pointed out that Leng’s “…fall might be related to a U.S. listed company.” Also, the article cited a source who claimed that Leng and the brother of the detained high-level government official “participated in the control of the shares of a U.S. listed company from behind the scenes.”

In response the Caixin report, JRJC issued a hastily prepared press release later that day announcing the resignation of Mr. Leng “for personal reason.” Incredibly, JRJC did not comment on any of the issues raised in Caixin’s report. JRJC thus appears to be determined to keep U.S. investors in the dark regarding the company’s numerous legal issues in China.

For U.S. investors, JRJC’s legal issues are compounded by the risky VIE structure of its Chinese operations. As many authors have previously noted, VIE structures often entail significant risks, especially when a company’s main Chinese operating subsidiaries are VIEs controlled by a person who is in legal trouble. JRJC historically did a poor job disclosing its VIE structure, which was recently questioned by the SEC resulting in JRJC filing an amended 2013 20-F on April 21, 2015 that added more detailed disclosures and related risks. Despite the additional disclosure, JRJC failed to disclose the resignation of CEO Zhao from key VIE management posts made in the weeks prior to the April 27, 2015 filing of its 2014 20-F.

We obtained and reviewed the SAIC records of JRJC’s Chinese VIE and directly owned operating subsidiaries. To our surprise, updated SAIC records show that CEO Zhao suddenly resigned as director, legal representative, and general manager of three key Chinese VIE subsidiaries over the course of the last few months. JRJC has failed to disclose Zhao’s resignations to investors.

The following are the three key VIE subsidiaries that reported the resignation of Zhao in updated SAIC filings: 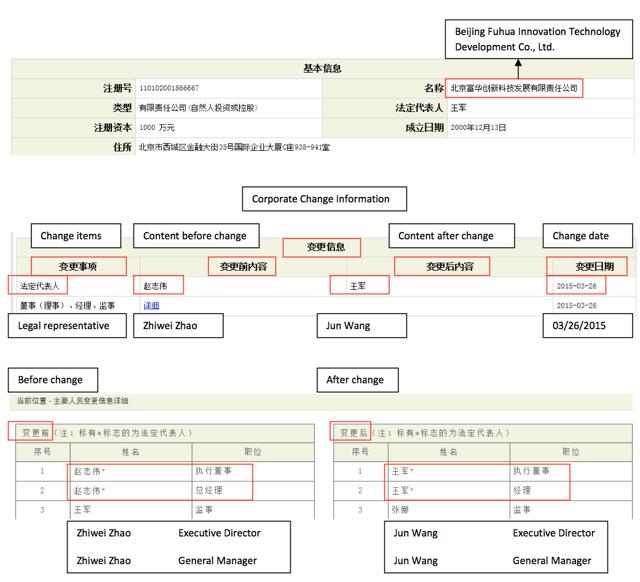 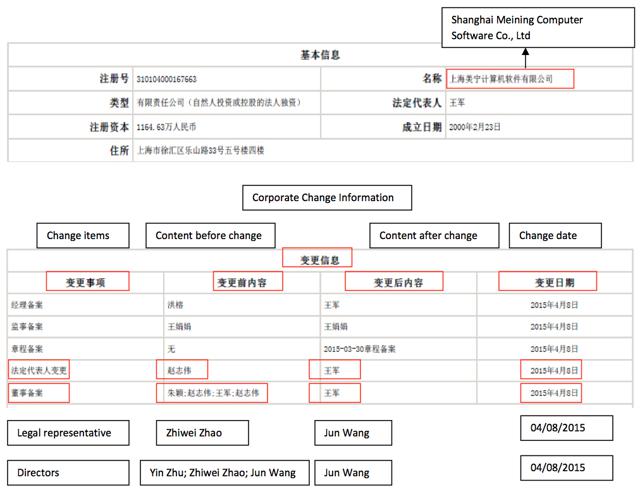 3. Shanghai Stockstar Wealth Management Co., Ltd. Shanghai Stockstar is a VIE that, along with its affiliates, are key to JRJC’s precious metals trading business, which in total contributed 72% of JRJC’s 2014 revenues. Chairman Zhao resigned as a director on April 17, 2015. No replacement was named. A translated screenshot of the Shanghai online SAIC: 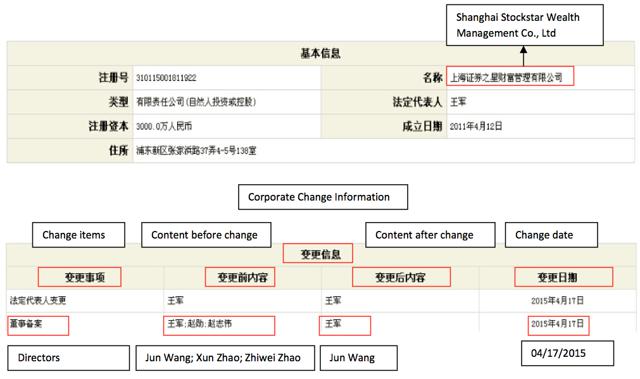 One additional subsidiary also reported the resignation of Zhao in updated SAIC filings:

Fortune Software (Beijing) Co., Ltd.  Fortune Software has registered capital of $12 million and is 100% owned by JRJC.   Chairman Zhao resigned as legal representative, director and general manager on April 17, 2015.  A person named Na Zhang was appointed as Zhao’s replacement.  A translated screenshot of the Beijing online SAIC record appears below: 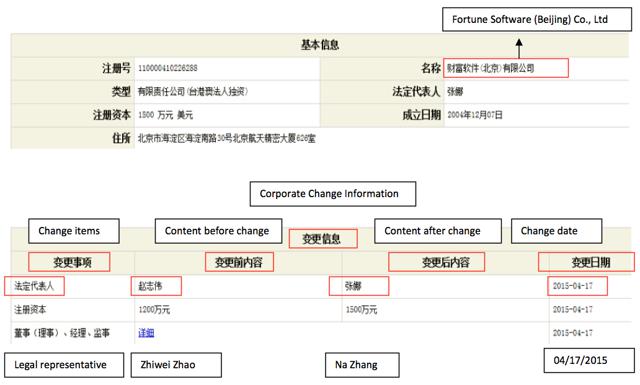 Ling Wang was a former long-time JRJC director and associate of Zhao, who fled China in 2014. Wang resigned from the board of JRJC in 2012. Following Wang’s resignation, JRJC made a questionable real estate investment with Wang’s company, Langfang Shengshi Real Estate Development Co., Ltd., as follows:

“In order to enhance our return on cash during the strategic transition period, in March 2013, we invested an aggregate $22.1 million in a real estate project in Langfang City, Hebei Province, developed by Langfang Shengshi Real Estate Development Co., Ltd. (the “Langfang Developer”).” (page 18 of the 2014 20-F)

As of December 26, 2013 Langfang Developer was 75% owned by Beijing Qingshi Investment Management Co., Ltd, which was 100% owned by Ling Wang, according to SAIC records shown below: 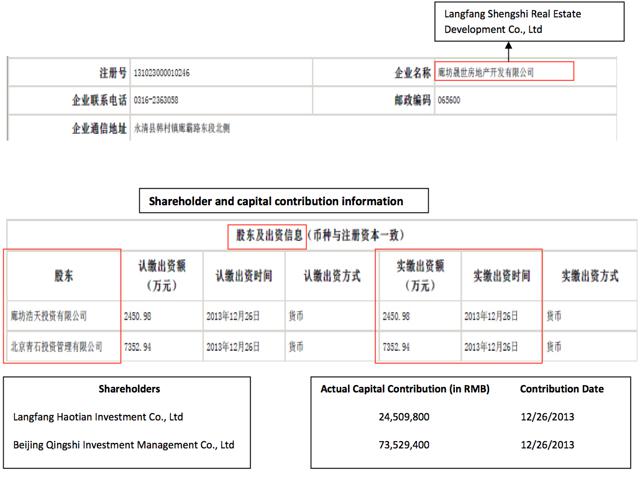 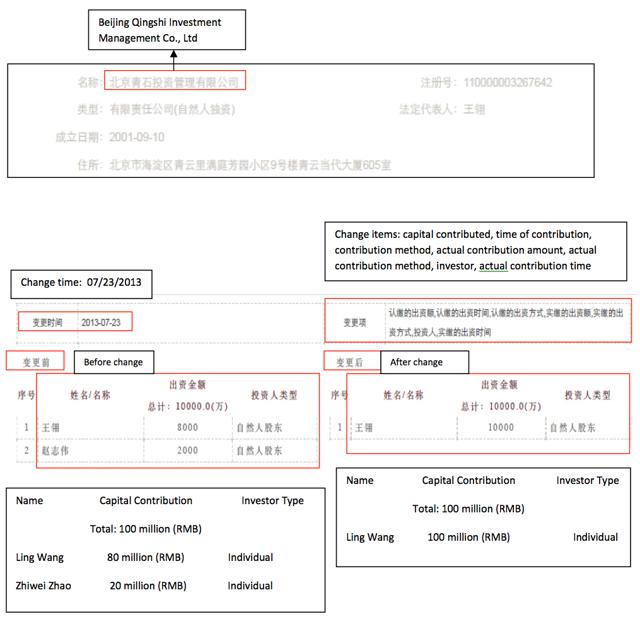 At the time of this suspicious investment (March 2013), JRJC CEO Zhao also failed to disclose that he had an indirect equity interest in Wang’s Langfang Developer, which according to the SAIC record (above) Zhao transferred to Ling Wang on July 23, 2013.

As of December 31, 2014, Wang’s Langfang Developer owed JRJC $25 million, according to the 20-F, which warns of the risk of failure to collect this outstanding amount (see page 18) but of course never discloses Wang’s predicament with the Chinese authorities. JRJC reported that it received $2.1 million from the Langfang Developer on March 10, 2015 (see page 76 of 20-F).

It seems that that the Chinese anti-corruption investigation is clearly targeting associates of Zhao (Leng and Wang) and appears to have caused JRJC enough concern that may have led Zhao to take the extreme step of resigning from his management positions in three key VIE subsidiaries.

JRJC repeatedly failed to disclose these highly material events, which in our opinion was part of a plan to intentionally mislead investors by concealing the extent of the Chinese government anti-corruption investigation. Even after being questioned by the SEC regarding the adequacy of its VIE disclosures, JRJC did not disclose the resignation of Zhao in its recently filed 2014 20-F filing, nor did JRJC file any amended legal updates of its VIE structure with the SEC.

We believe it’s fair to assume that the anti-corruption investigation and the removal of Chairman Zhao from the Chinese management will have a material negative impact on JRJC’s business.

Investors may recall that NQ Mobile (NQ) Chairman and Co-CEO Henry Yu Lin was similarly reported to be in legal trouble in China in December 2014. On December 10, 2014, NQ announced Lin had resigned “due to personal reasons unrelated to the Company.” Shares of NQ fell from $6.03 the day before Lin’s resignation to $3.91 at year-end.

We believe that JRJC may perform even worse than NQ without its Chairman and CEO, as the company hasn’t turned a profit in the last three years.