On July 7, 2014 Dan Bates, CEO of Windstream Technologies (WSTI), issued a rebuttal press release to our short thesis article that we published on Seeking Alpha on July 1, 2014. The CEO challenged some of our evidence even went as far as to state that:

The following article addresses the CEO’s rebuttal comments and in our opinion shows management’s inability to understand its own filings.

But before we discuss the specifics, investors may want to know that despite all the great news issued by WSTI, the CFO, CEO and COO have sold some stock as disclosed in a Form D filed on June 6, 2014. It appears that they have already sold $406,800 worth of stock.

Dan Bates attempted to address our inquiry into share transaction activity by VFT:

“An article alleges that 7.8 million shares have “mysteriously disappeared.”

In fact, Vanguard Financial Trust (“VFT”), our single largest investor, is an insider and cannot sell its position. VFT currently holds every share purchased, which is 9.9 million shares with warrants totaling 2.8 million shares. Those disclosures have been made by VFT and the Company.

In fact, the article is incorrect in its representations of share amounts, history of purchases and assertions of a divestiture. Either the author(s) does not know how to read public filings or has elected to ignore the public filings containing the correct information.”

We will take this opportunity to issue a timeline of events relating to WSTI’s filing disclosure of VFT equity ownership in WSTI. We originally questioned why WSTI’ s 2014 10K filing did not show VFT’s ownership stake in WSTI when it clearly should have been obvious.

Later, Vanguard Financial Trust’s (“VFT”) ownership stake of 7.8 million shares was disclosed in a proxy of WSTI on February 13, 2014.

A Form 3 pertaining to VFT (covering 9.9 million shares) was filed on March 27, 2014 prompted by a transaction that allegedly took place in August of 2013. This form 3 showed that VFT owned 9.9 million shares: 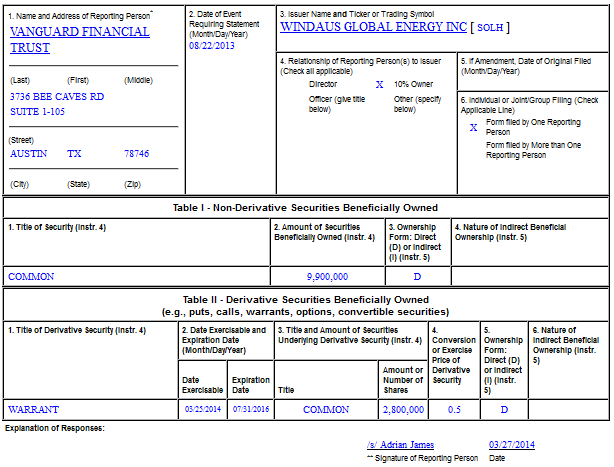 As the 10K was filed well after the Form 3 and the transaction date, we are correct to pose questions related to VFT shares. Why did WSTI omit VFT ownership stake from its 2013 10K? We have a hard time believing that not including the ownership stake of its largest investor just slipped management’s mind. Recall in our April 17, 2014 article about the AHII P&D that we discussed a questionable ownership stake by an individual that was once mentioned in a filing and then “magically” disappeared in an amended filing.

Our question to management: If you are keenly aware of who your largest investor is why was its share stake information not in your 10K? Is it too far-fetched to conclude that maybe the company does not want to telegraph that Adrian James has invested in the company?

More importantly, we are curious why Dan Bates did not address our findings that Adrian James, the individual signing off on VFT form 3 filings disclosing VFT’s ownership in WSTI, has been involved in prior paid promotions on other penny stock companies. Why is the company dealing with an investor (its largest) who has been accused of running promotions in the past? It appears hypocritical that in one breath, per an 8K filed on June 27, 2014, management seems to condemn the current promotion on their company by the Wall Street Revelator, yet it appears they may have sold stock to a promoter as part of a financing transaction. In fact, Adrian James was allegedly involved in pumping another stock through the Wall Street Revelator:

Reply by a reader to our Seeking Alpha WSTI article:

“Very good article… I agree with you that Adrian James is likely a key insider involved in WSTI as both a shareholder and promoter. I noticed you linked an old article of ours:

You’ll notice that Adrian James also used Andrew Carpenter (WallStreet Revelator) to help promote a past ticker for which he was involved in a similar manner (OTCQB:PGLC).”

Furthermore, we provided evidence that Adrian has run promotions in the past, but there is more evidence from an I-Hub post.

“CFT is owned and operated by Stock Professor Inc. which is an American corporation. Stock Professor Inc., and its owners, and their affiliates, directors and officers, and immediate family members, are hereafter collectively referred to as SPI or we or us or our). SPI electronically disseminates information (the Information) on its websites, in newsletters, featured reports, spam compliant double-opt in email communications or otherwise pertaining to Profiled Companies’ (the Issuer or Issuers or Profiled Company or Profiled Companies), the securities of which are most frequently common stock shares quoted on the Over the Counter Bulletin Board (OTCBB) or Pink Sheets. SPI receives compensation in shares of the Issuer and it or its associates, affiliated entities, officers, directors or immediate family members fully intend to sell the Shares immediately upon their receipt as well as during the dissemination of such Information or within hours, days, weeks or months thereafter, or at any time; as a result, SPI’s selling activities may cause significant volatility in the Issuer’s stock price and/or significantly depress the Issuer’s stock price; SPI affiliates, officers, directors and employees may have also bought or may buy the shares discussed in this report and may profit in the event those shares rise in value. SPI will not advise as to when it decides to sell and does not and will not offer any opinion as to when others should sell; each investor must make that decision based on his or her judgment of the market. SPI and its affiliate companies have been paid one million five hundred thousand dollars in cash and five hundred thousand shares of restricted stock by Sagebrush Gold for this advertisement. We have also purchased ninety thousand shares (which are now free trading shares) in a private placement, one hundred thousand shares in the open market and five hundred thousand restricted shares from a third party shareholder. We fully intend to sell these shares into the marketing campaign of the profiled company, even as we speak optimistically about the future of the profiled company. SPI may buy and sell the Shares in the open market before, during or after the dissemination of the Information or at any time, which may cause significant volatility including drops in the price of the Issuer’s stock price and/or significantly depress the Issuer’s stock price.”

“An article contends that contracts, distribution agreements and past pilot successes with ACC Limited, Meytek Group, Key City Trading, Suka Wind & Solar, Senan Liberia, Inc., Africa Energy Limited and Viza Networks, Limited are not real and states “as is often the case with P&D’s, most of these customers are located in emerging markets.”

We never said that these agreements were not “real”. But we are questioning the company’s ability to execute its contracts if it can’t raise a substantial amount of capital. Additionally, many of these “contracts” are just purchase orders that appear to have not been filled. A Seeking Alpha article published by Auspex Research on July 8, 2014 discusses a past $10M purchase order (in 2012) from a Brazilian company that appears to have not been meaningfully executed. The author states the company also projected sales for 2012 and 2013 to come in at $5.6 million and $55.8 million respectively. Well, 2013 sales were under a million. The author poses a scenario where the company could have been using this purchase order plus lofty sales projections “to possibly lure new investors”.

The following passages, not included in our original article, from WSTI’s Q1 2014 filing show the company may desperately be in the need of capital, one even showing that the company had defaulted on a $1.4 million loan in 2012, of which it has not made any payments on as disclosed in it’s Q1 2014 filing. Furthermore, per the 2013 10K, the company had a large outstanding liability with its product manufacturer that was inhibiting it from receiving additional units.

“We estimate that within the next 12 months we will need substantial cash and liquidity for operations, and we do not have sufficient cash on hand to meet this requirement.” 2013 10K

“WindStream has a history of recurring losses from operations and has an accumulated deficit of $10,480,672 as of December 31, 2013. Management is unable to predict if and when we will be to generate positive cash flow. As a result, there is substantial doubt about our ability to continue as a going concern. Our plan regarding these matters is to raise additional debt and/or equity financing to allow us the ability to cover our current cash flow requirements and meet our obligations as they become due.” 2013 10K

“Our ability to pay key suppliers on time will allow us to effectively manage our business. Currently we have a large outstanding liability with our product manufacturer that is inhibiting us from receiving additional units at this time. In addition, we have other large outstanding accounts payable with key suppliers that may inhibit the Company from receiving system product in the future.” 2013 10K

Also, here is a quote from an article from the Jamaica Observer clearly mentioning that Windstream needs funding to fulfill its Jamaican contract:

“If we are successful in executing this contract and are able to secure the needed capital to fulfill this large order, at current rates, this could potentially result in greater than US$120 million of revenue to WindStream,” stated the company in a notice to shareholders obtained by the BusinessObserver.”

“This contract calls for US$14.5 million of products to begin delivery in first quarter of 2014,” stated Windstream about its Jamaica contract.”

To our knowledge, the company had not filled meaningful parts of this order during Q1 2014.

“The Company received a $2 million working capital line of credit through GBC International Bank of California.”

We are not impressed with this development given that:

As we stated in our original WSTI article, 39.6 million shares were issued to Windstream Technologies to complete the reverse merger transaction that closed on May 22, 2013. We were able to identify the whereabouts of 21.5 million shares.

That leaves 18 million shares that we think management should inform investors of their origin to help build credibility. And this should be easy enough given this statement from WSTI’s Q1 2014 filing:

We believe that this becomes a very relevant point once a paid promotional campaign commences on a penny stock. Maintaining less than 5% ownership is a postulated way to allow for the sale of stock across multiple brokerage accounts in P&Ds, without disclosure. We would suggest that the company disclose who these designees are. We assume the above quoted passage to mean that “the shareholder” is Dan Bates:

We didn’t even talk about the shares directors have/may receive in the form of options and warrants with ridiculous exercises prices. It appears that these securities were part of the reverse merger consideration and could telegraph investors what these insiders really may think WSTI is worth and how potentially wealthy they have become. Here are some Form 3’s that were filed at the end of March 2014:

The Windstream reverse merger was completed on May 22, 2013. The form 3’s indicate that the “date of the event requiring statement” occurred on May 10, 2013 which begs us to ask why were the form 3’s filed almost a year later. Furthermore, the company indicated that there had been no relationship between it and Windstream (pre-merger). Refer to the following statement in a Form 8K/A on May 22, 2013:

If WSTI is going to respond to our article they should address all of our findings, as well as the findings mentioned in the Auspex Research article published on Seeking Alpha.