Cleantech Solutions Internation (NASDAQ:CLNT) wowed investors with what appeared to be home run financial results for its third quarter ending September 30, 2012. Reported sales increased 48.5% to $17.3 million and EPS increased 91% to $0.88. CLNT attracted our attention after a bearish November 21, 2012 article was published on Seeking Alpha titled “A Troubling Visit to Cleantech Solutions.”

Following these developments and dramatic volatility in CLNT’s shares, we decided to visit CLNT for a firsthand glimpse of the company’s operations. While we cannot attest to how CLNT has used capital it has been able to raise in the U.S. or to the claims it has made in all of its prior disclosures, we have been able to cross check some of the company’s recent claims. Our initial due diligence confirms that a good deal of information disclosed to U.S investors, as well as recent financials presented in CLNT’s SEC filings, may hold some credence.

As CLNT introduced new types of dyeing equipment, its dyeing and finishing equipment business appears to be significantly growing and may more than offset the decreasing performance of its wind power industry business.

The information we have gathered and confirmed may give investors enough confidence to assign a conservative short-term price target for CLNT of $9.00 per share, which is a meager 5 times trailing EPS and more than double its current level of around $4.40 per share. As we will discuss, we believe there could be significant upside to this target, especially if the company takes steps to increase the transparency of its operations.

This is a testament to how the stabilization in China’s solar energy industry can fuel substantial growth for CLNT’s forged rolled rings business serving industries other than wind power. Due to Chinese government subsidies for solar energy, it is possible that CLNT can continue to grow its forged rolled rings business serving this and possibly other industries as well. Thus, 2 out of 3 market segments that CLNT serves, currently comprising around 75% of revenues, appear to be running on all cylinders.

The following is a summary of findings from our visit to CLNT operations between November 23 and 26, 2012.

Furthermore, we also pulled the SAIC files for all of CLNT’s Chinese subsidiaries and confirmed CLNT’s corporate structure as disclosed in these filings.

CLNT basically has two ongoing businesses through its subsidiaries.

The corporate chart of CLNT is as follows: 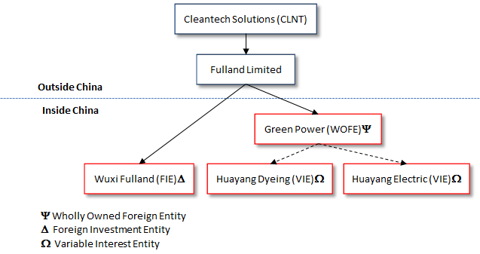 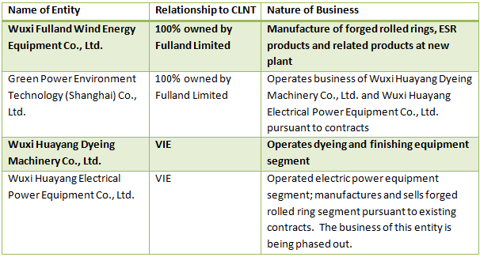 The following table sets forth information on the revenue of CLNT’s “forged rolled rings and related components” industry, as well as the “dyeing and finishing equipment” segment, in dollars and as a percent of revenue: 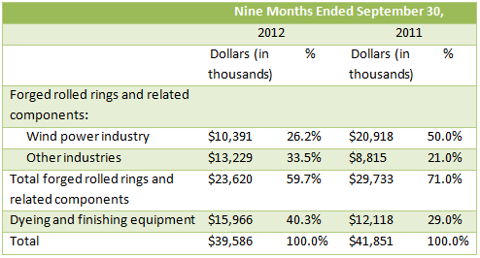 Our investigator visited CLNT from Nov. 23 to Nov. 26, 2012 in Qianzhou Township Huishan District, Wuxi City, Jiangsu province. The following satellite map is marked with CLNT’s two facilities that we had a chance to visit – one for dyeing and a finishing equipment facility (old plant) and one for forged rolled rings and related components (new plant). 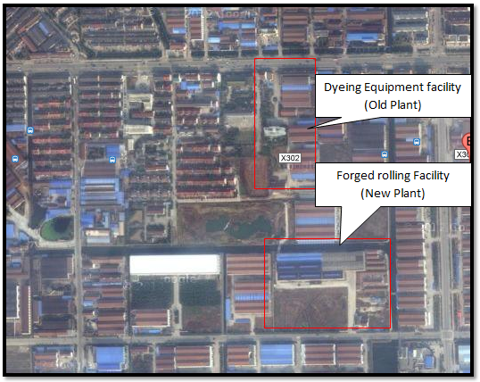 We talked to several of CLNT’s employees without disclosing our identity. After cross-checking the information we gleaned from these employees, it was overall in line with company disclosures. The following points are what we gathered from our conversations, corroborated with information from company disclosures and our own observations.

“I showed up at Cleantech on a Tuesday, prepared for a full day tour of the facilities and interview with management. Management had been informed about my visit some weeks before and I was told that they planned on putting on quite a show of how their business was booming. However, the entire tour of the facilities took less than 30 minutes because the operations were conducted in a single, small open air warehouse.

The part that was intended to be so visually impressive was the ESR (“electro-slag re-melted”) production facilities and this was also said to be the key driver of CLNT’s huge future revenue potential. However, apparently the ESR line takes time to heat up and start production, and it wasn’t running at all on the day I visited.

Instead what I saw was quite literally fewer than 10 employees (in total) engaged in very low-end metal stamping of forged rings which are used in windmills.”

Regarding the ESR business, CLNT made a clear disclosure that the business was shut down since the end of 2011. The relevant disclosures were made in the company’s SEC documents:

“In October 2009, we ordered machinery to expand our completed state-of-the-art forged product facility with a new production line, enabling us to manufacture ESR forged products for the high performance components market for various industries. We delivered the initial units from this production line in July 2010 to one customer, which has been our only ESR customer through December 31, 2011. For fiscal 2011, we generated revenue of $1,687,756 from the sale of ESR forged products as compared to $7,568,774 for fiscal 2010. This customer is using our ESR products primarily in the steel manufacturing equipment and accordingly revenues from the sale of ESR products are included in forged rolled rings – other industries. The contract with this customer has expired and we have no new orders for ESR products as of the date of this report.”

In light of the above excerpts, we can say that it appears that CLNT did not make any false statements regarding its ESR business. However, there is a very real possibility the CLNT may have to write off around USD 9 million related to the ESR business due to annual audit requirements. But we only view this as a worst case scenario and a one-time non-cash event.

CLNT reported strong 2012 third quarter results. During this quarter, the company’s top and bottom-line numbers made significant strides compared to the past several quarters. 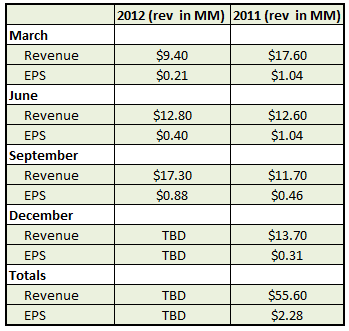 CLNT’s trailing fully taxed non-GAAP EPS is $1.80 and at the stock’s current price of around $4.40 per share, it is selling at a trailing P/E multiple of 2.4. This leads us to believe that investors have likely baked a brazen fraud scenario into the number, which appears unwarranted in light of our due diligence findings.

Given our findings, we think that investors may at the very minimum bid CLNT shares upwards to trade at a trailing P/E of 5 as they begin to give CLNT the benefit of the doubt that they may be telling the truth to U.S. investors about its operations. This would lead to an eventual short-term price target of $9.00. Keep in mind that based on CLNT’s 2012 third quarter results, the company’s forward 12 months fully taxed non-GAAP EPS is tracking at about $3.50 if at least $0.88 is attained for the next three quarters, which could lead to significant upside to our price target.

Having said that, the absence of seasonality disclosures and lack of forward-looking sales/income guidance could add a few caveats to our casual EPS estimate. We would like the company to be more transparent with the street to give it the ammo necessary to calculate a forward calculation with confidence. Regarding seasonality, from what we have seen in the industry CLNT is involved with, it has not been an issue.

While we can’t yet comment on whether 2012 third quarter revenue levels have set a new high water mark, we believe that our OTGDD, the industry outlook as well as management’s comments in the third quarter press release indicate that sales momentum can continue. Furthermore, management believes that margin expansion is in the cards:

“Growth of our forged products for non-wind applications has been very strong, and we are exploring additional markets, including petroleum and petrochemical industries. We are also excited about the new opportunities presented in China’s solar industry, which is expected to undergo some major change following recent supportive government policies, and we are also expanding our range to include high performance components for production equipment targeting smart phones and LED lighting. In the dyeing and finishing equipment segment, we are benefiting from a major upgrade cycle, as manufacturers embrace our more energy efficient and environmentally friendly technology. We anticipate strong growth potential in 2013 with the expected launch of our new after-treatment equipment, which is in the late stages of research and development.

Thanks to improving volumes and strong expense controls, our margins improved dramatically in the third quarter. In the next few quarters, we continue to foresee a slight increase in our margins, as raw material costs are not expected to have great fluctuations given the general weak economy. We have been generating positive cash flow from operations and believe they are sufficient to fund our new product development initiatives,” Mr. Wu concluded.

“Our capital requirements for the next twelve months relate to purchasing machinery for the manufacture of products for the solar industry as well as additional investment in our forged rolled rings division. We also expect to incur modest expenses in maintaining our dyeing business. We believe that our cash flow from operations will be sufficient to meet our anticipated cash requirements for the next twelve months.”

Also keep in mind that CLNT is selling well below its tangible book value per share of $25 after we totally write off USD 9 million for the ESR business.

As CLNT introduced new types of dyeing equipment, its dyeing and finishing equipment business appears to be significantly growing and may somewhat counter-balance the decrease in wind power industry business.

CLNT disclosed in its files that its ESR business did not generate any new orders in 2012 and recorded a depreciation expense related to ESR production equipment.