At times we inform our GeoInvesting subscribers about investment ideas that we think institutions have yet to fully identify, but may soon quickly allocate significant capital into. In such cases, we savor the opportunity to buy a stock before institutional players drive its share price to much higher levels. We believe an investment in Hilltop Holdings (HTH) presents such an opportunity.

Hilltop’s present business is not sexy by any means. Since 2007, when the company sold its Real Estate Investment Trust (“REIT”) business and purchased NLASCO Group, the company’s business has solely consisted of a property and casualty insurance operation. But the story is about to become more exciting.

On May 8, 2012, HTH announced that it had entered a merger agreement with Plains Capital, a one billion dollar, profitable banking institution with operations in the United States’ number one ranked growth state, Texas. The Chairman of HTH, Gerald Ford, has an impeccable track record of successfully investing in banking enterprises and “Since the 1970s has been one of the most successful bankers in the sector.”

We believe that savvy investors who buy HTH now will likely quickly capture $3.40 per share of gains in ensuing trading sessions. Why? Even though shareholders have already approved the merger transaction, the market is discounting the value of HTH shares as it waits for the company to “formally” consummate the acquisition agreement with Plains Capital. Note that the transaction is expected to close before the end of 2012.

Aside from Raymond James which has covered HTH since December 21, 2009, only one new brokerage firm has initiated coverage on HTH before the closing of the transaction. Once the acquisition officially closes, we predict that a slew of “Bulge Brackets” (large well known Brokerage Houses) including JPMorgan Chase & Co. (JPM), who currently covers 27 regional banks, as well as Morgan Stanley (MS), Goldman Sachs Group, Inc. (GS) and Deutsche Bank (DB) will likely initiate coverage on HTH. This should lead to a:

Assuming the merger transaction closes, if we add Plains Capital’s value to Hilltop’s current operations, we derive a low end near-term target of $15.50 to $16.95, which is comfortably above analyst expectations. As we will discuss, we believe shares could conceivably fetch north of our target price range.

Post-acquisition, the Plains Capital transaction will:

In the end, the Plains acquisition is expected to result in significant EPS accretion for HTH. For 2012, not including Plains’ operations, analysts had expected HTH to report EPS of negative $0.10. Some Analysts are assuming that the HTH/Plains transaction will close and have baked in Plains Capital’s contribution into 2013 and 2014. They are projecting 2013 and 2014 EPS of $1.12 and $1.23, respectively.

Investors need to stay alert and consider taking action as the information arbitrage gap is closing at an accelerated rate.

Leading up to the announcement of the Plains Capital agreement on May 8, 2012, the market was valuing HTH shares at around $8.00. The following chart shows that the market has been closing the arbitrage gap since HTH and Plains Capital entered into an exchange agreement. 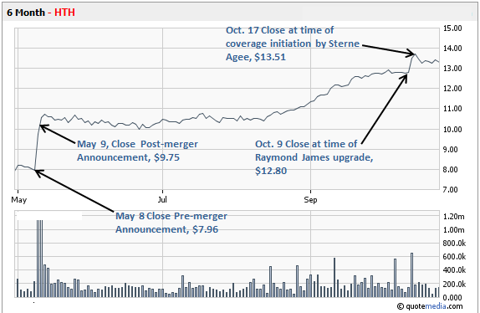 As can be seen, upon the announcement of the merger agreement, shares quickly jumped by 22% to $9.8 on May 9, 2012 and have been gradually accelerating upward as the market prices in the high probability that these two companies will consummate the transaction. Even though the stock is trading at $13.59 as of October 31, 2012, we still believe attractive near-term upside exists.

Investors can also reference the “arbitrage” price action of Tile Shop Holdings (TTS), a large legitimate expanding retail tile company that saw its shares rise roughly 18% percent in anticipation of the consummation of a merger transaction and added another 18% after the completion of this transaction on August 21, 2012.

Tangible book value, which eliminates preferred stock, goodwill and other intangible assets, has been an accepted valuation practice when assigning a minimum takeover value price point for financial service companies for at least 3 reasons:

Because HTH is a public company, it also necessary to value the company on its EPS. For those investors that would prefer to value HTH on its earnings power, recall what we mentioned earlier in this article that:

We argue that assigning a premium valuation to Plains Capital is appropriate and also think it is quite possible that HTH shares could trade at higher multiples than our assumptions. The current low interest rate environment and improving housing sector will provide a favorable growth environment for at least the next two years, leading investors to assign higher multiples to high-quality banks, especially if they are serving growth geographies, as Plains does in Texas. Banking operations would bring more consistent cash flows to the company compared to the sometimes unpredictable nature of a property casualty insurer. Also, while HTH insurance operations have not shown consistent growth, Plains Capital has experienced substantial growth over the past few years which could support higher than average valuation multiples:

Mid to long-term valuation multiples could get a boost if HTH were to dispose of its insurance operations, post- merger.

Referencing history, when HTH made the decision to operate an insurance company, it divested its prior business ventures. For this reason, we believe that, post-acquisition, HTH could eventually consider selling its insurance business at a multiple of book greater than one. Our current valuation scenario only values insurance operations at one times book. Investors would likely welcome the divestiture of the Insurance Company. Aside from bringing an influx of cash to grow banking operations, such a move would eliminate a volatile operation and allow investors to reduce the required risk premium they assign to HTH shares through higher book value and P/E multiples.

Ride the Coattails of Success

Another interesting sizzle to the story is that the Chairman of HTH, Gerald Ford, has an impeccable track record of successfully investing in banking enterprises.

“Since the 1970s, Hilltop Holdings Inc. Chairman Gerald Ford has been one of the most successful bankers in the sector. Starting with his first bank acquisition in 1975, Ford consolidated a number of banks into First United Bank Group Inc., which he sold in 1994 to Norwest Corp., now Wells Fargo & Co. In 2010, Ford invested in Pacific Capital Bancorp and is set to more than double that investment when the company completes its sale to Mitsubishi UFJ Financial Group Inc. unit UnionBanCal Corp.” 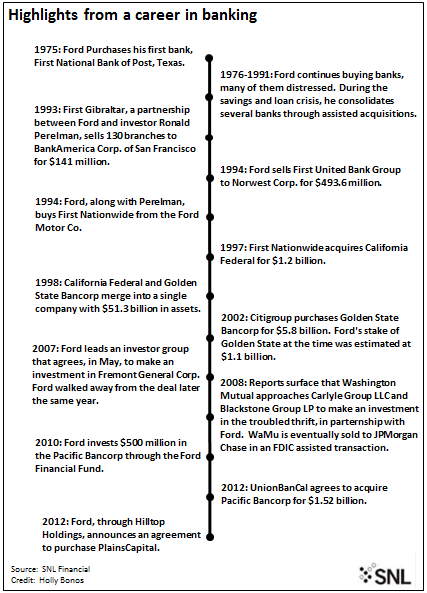 Investing in HTH gives investors a chance to take advantage of an information arbitrage that even the institutions have not fully identified in mass – one that we predict will lead to HTH shares quickly reaching and possibly exceeding $17.00 per share. This opportunity has been created by the lack of press releases and also by the fact that the HTH/Plains Capital transaction has not “technically” closed. The price action and recent analyst upgrades indicate that the acquisition will close. Given that the market will not allow the value inefficiency in HTH shares to linger, we believe that investors only have a limited window to jump aboard this accelerating train.