More often than not Investors attempt to divine a company’s future prospects by looking in the rear-view mirror. After all, at least history is known and people generally assume conditions that have existed in the past will continue in the future. Investor opinions also tend to cluster around the prevailing bullish or bearish consensus at any point in time which at extremes creates market imbalances and opportunities.

The GeoTeam looks through what most analysts and investors perceive to be the obvious to see if there is something more at play. Time and again, a company that is given up for dead is simply going through a transition as it reacts to ever-changing markets by subtly or not so subtly changing its business model. To survive and prosper over long periods of time all companies must evolve, especially those that operate in the rapidly changing landscape of the internet.

We have found a once prominent company that fell from grace when the rules of the game for its primary business changed abruptly – Demand Media (DMD).  As its revenues declined and investor sentiment soured, the company that was once a star became yesterday’s news. In the meantime, while investors have looked elsewhere for opportunities, Demand Media has adapted and adjusted its business model and appears to be on the threshold of renewed growth, offering investors the prospect for outsized gains in the coming months and years.

The company has several things going for it:

When DMD went public in early 2011, the C&M/registrar revenue mix was approximately 65%/35%. That has changed dramatically over the last 3+ years and now stands at 55%/45%. While the registrar business has continued its strong growth, the C&M business has taken a hit since Google (GOOG) changed its search algorithms. Essentially, the rules of the game DMD was playing changed and accordingly the company has had to adapt. In this article, we will focus on the C&M business and why we believe that actions taken by management to adjust DMD’s business model and investments in new initiatives are paying off. First, let’s take a look at how Google’s introduction of Panda impacted DMD’s revenue mix since 2011. 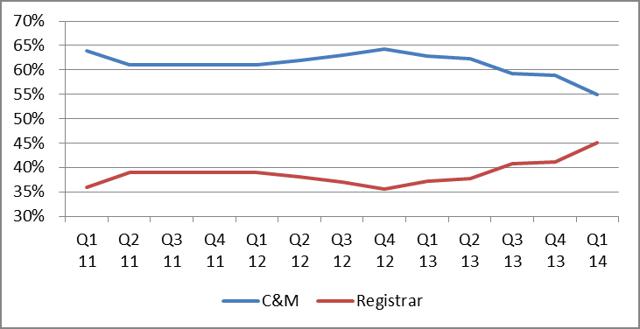 When DMD went public, its C&M business was all the rage among analysts and investors who bid the shares up so high that at one point the company was valued more than the New York Times. To the market, DMD had found a new model for online content delivery. While publications such as the NYT relied on well-paid professional writers to produce high-quality content, DMD’s business revolved around generating low-cost, massive content at a scale designed to show up in Google based on search terms and keyword prices. For example, DMD produced approximately 4,000 articles a month paying freelancers between $15 and $20 per piece, whereas professional writers are paid upwards of $100+ per article by mainstream publications.

Of course, DMD’s business model came with its own set of problems. On May 27, 2014, Anonymous Analytics (“AA”) recently published a detailed “conviction buy” report, “Demand Media – A Spin-Off, a Buyout, and a New Internet Era”, assigning a price target on DMD of $10.36 and 138% upside. The report does an excellent job of explaining DMD’s business model, the troubles it ran up against, and what management has done and is doing to adapt and make necessary changes.

To summarize: Google built its reputation on providing high-quality, relevant content in its search results. Most saw DMD’s content as relatively poor and void of substance – which shouldn’t come as a surprise considering its source of content was low-paid freelance writers. In May 2013, Google released an algorithm update code-named Panda, which was designed to reduce the search results of websites that mass-produced low-quality content. The algorithm modifications negatively impacted eHow and Livestrong, DMD’s top two web properties. The result was a decline in both web traffic and DMD’s share price which has persisted ever since, as shown below.

The reason behind AA’s high optimism for DMD’s C&M business stems from the company’s analysis, based on recent web traffic data and search engine visibility showing that both eHow and Livestrong have curtailed their traffic losses and that business appears to have stabilized.(Source: AA report, pages 20-21)

In fact, we think that AA is not optimistic enough. At the same time that AA was publishing its report, Google released a new algorithm update named Panda 4.0. The algorithm update impacted the search rankings of a variety of sites, with a focus on penalizing coupon and news aggregator websites.Most notably, RetailMeNot (SALE) crashed 20% due to being pushed down in Google search results.

However, for every loser, there is a winner in search rankings. While Google’s Panda updates have historically been seen as a negative for DMD, this time around, the update actually pushed DMD’s web properties higher in search results. The impact was immediate and shows up both in Alexa as well as SearchMetrics data: 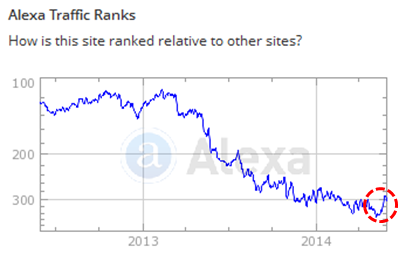 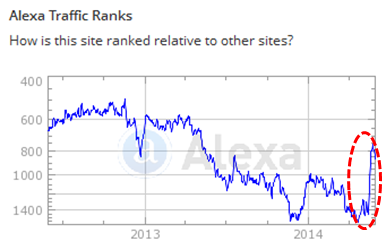 These graphs show that as of mid-May 2014, DMD’s two biggest web properties are beginning to step their way back in Google’s good graces. There are likely more benefits to come from Google’s recent update. When Google released its Panda update back in May 2013, traffic declines in DMD’s web properties were gradual and continued over the course of a year. With that precedent, we would expect Google’s new algorithm to continue to push DMD’s web properties progressively higher in search results over an extended time frame.

While DMD is now benefiting from Google, analysts have not yet caught on. Contrast the above information with some of the headlines from research notes put out by sell-side analysts after DMD’s Q1 2014 results:

These analysts have a low rating on DMD because they are using the rear-view mirror to forecast continued declines at the C&M business. However, it should be obvious now that not only have DMD’s web properties stemmed their traffic losses (AA’s thesis), but Google’s new algorithm change has actually provided a boost to DMD.

What do you suppose happens to a stock when sell-side analysts are at peak pessimism on a company that suddenly has an improved outlook from a game-changing catalyst? (Think Tesla).

Why Did DMD Benefit From Panda 4.0?

It’s impossible to know exactly why DMD was one of the net beneficiaries of Google’s most recent update. However, when Google released its previous Panda update last year, the focus was on promoting good content. Google even provided webmasters with guidance on how to build high-quality sites. Since being hit by Panda back in May 2013, DMD has carried out substantial remediation work on its websites, including removing poor articles, enhancing the user experience, and providing more words, pictures, and videos that users are searching for. One year later, DMD has been allowed to “take the test again,” so to speak, and passed Google’s new search ranking criteria and has now been rewarded accordingly. As long as DMD can keep its focus on improving quality, it should continue to benefit from higher Google rankings, which in turn means shareholders will benefit from DMD’s higher share price.

Last week’s Google algorithm update is a likely game-changer for DMD. Over the last year, analysts and investors have been punishing DMD entirely for being on the wrong end of Google’s Panda updates. That is set to change now that Google is favoring DMD in its search rankings. AA’s “conviction buy” report was prepared before Google’s algorithm change came out. If AA thought the DMD had 138% upside before the update, then the upside should be even higher now.

We believe that sell-side analysts will be forced to note this major positive for DMD and revalue the company in the coming weeks.