Amtrust (AFSI) – Could 16% of AmTrust Outstanding Shares Hit the Bid?

GeoInvesting has become aware of a piece on Amtrust (NASDAQ:AFSI) written by Roddy Boyd for the Southern Investigative Reporting Foundation, published on August 17, 2014. The piece is going to be sourced throughout this write-up and can be viewed in its entirety here. GeoInvesting recommends that all parties involved with AmTrust read the full article, as its consequences not only serve to point out questionable activity, but also could have a material effect on AmTrust stock.

In his column, Mr. Boyd takes an in-depth look into how the Karfunkel brothers have seemingly been conducting family business.

His article starts by pointing out that the Karfunkel brothers have used their foundations (the “Hod” and “Chesed” foundations) to stake high risk gambles and appease their unusually large tolerance for risk, with transactions including selling puts on both Fannie May and Citigroup (NYSE:C) in 2008. The brothers also took on similar bets with American International Group (NYSE:AIG) and Lehman Brothers (OTC:LEHLQ) the very week before the institutions collapsed.

Contrary to the Karfunkel’s assertions below, losses from their option trading adventures – in combination with the collapse in the equity markets – had a disastrous effect on the fair market value of the foundation’s portfolios, with declines of 64 percent for Hod and 43 percent for Chesed.

The article raises questions about the brothers’ foundations extending loans. While loans are allowed to be received, the article notes that they are prohibited from making loans or extending credit, “especially to what the IRS refers to as ‘disqualified persons’, a term meaning the founders, their spouses and immediate family members, as well as substantial donors to the fund.”

The article then argues that a GRAT set up by Michael Karfunkel was “gifted 320,000” AmTrust shares by its grantor. A GRAT executes an annuity to the grantor before then distributing the rest of the assets to beneficiaries. The point of a GRAT, simply put, is that the underlying assets will hopefully appreciate more than the interest required to be paid to the IRS. The filing for the transaction, the article notes, was done four months late. Contributing additional shares to a GRAT after its initial contract is forbidden to begin with, the article notes.

Boyd’s article cites the founder of the GRAT, Richard B. Covey, who states that there’s basically no reason to alter the GRAT contract in place from the initial annuity inner workings. Covey also couldn’t understand any way in which a GRAT could make a donation.

In addition, the article goes on to question whether or not the Karfunkel brothers were inflating the price of the stock donated to their foundations to begin with. This would benefit the donor, who gets to write off the amount.

The article goes on to note:

Of the nearly $110 million in shares Chesed received from George Karfunkel, SIRF estimates that almost $31 million of this came from valuations above the then market prices.

The article argues that the accounting policy governing fair market value of stock donations appears to have been simply ignored. Take, for instance, this 2005 donation of MRU Holdings:

On Jul. 1, 2009 George Karfunkel gave Chesed one million shares of Plano, Texas-based energy concern Cubic Energy and 6.15 million shares of AmTrust, worth, the filing asserted, $78.33 million. Chesed’s claimed value was well above the market value of the securities. According to Yahoo! Finance, the average of the high and low prices for Cubic and AmTrust on Jul. 1, 2009 were, respectively, $1.07 and $11.55 versus Chesed’s implied values of $4.50 and $12 per share.

Here’s the full list of donations and corresponding prices that Boyd identified:

The Karfunkel’s response, found here, was as follows: 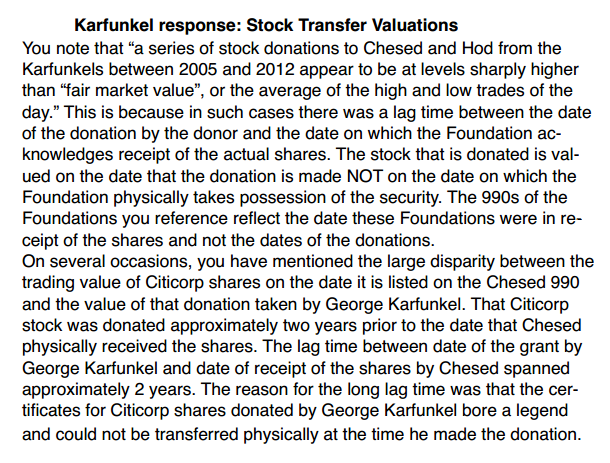 Boyd goes on to write that the brothers’ foundations both currently hold a substantial amount of AmTrust stock; Hod and Chesed, respectively, hold 9.6 percent and 10.5 percent of the shares outstanding.

The article lays out a timeline in which the brothers’ foundations began to stockpile AmTrust stock:

If Mr. Boyd’s article holds water, there could be serious reason for concern for holders of AmTrust common stock.

According to Yahoo Finance, there’s currently 75.62 million shares outstanding. Accordingly, the foundations’ holdings represent about 16% of the outstanding shares that could potentially need to be liquidated, which would no doubt cause a serious move in AmTrust stock when it’s brought to market.

According to the article, these shares cannot be sold back to the Karfunkel family; they can only be sold on the open market or offloaded to an unaffiliated public charity.

Our involvement in this case stems back to our original report on AmTrust entitled “AmTrust Financial: A House of Cards?” that we released on December 12, 2013.