What started out as a basic curiosity about the ownership structure of Subaye (OTCPK:SBAY) led to an on-the-ground investigation into the fundamental operations of the company. Our initial red flags were born out of misrepresentations of ownership structure as well as questions into the effectiveness and potential of the company’s website and “cloud business products” in garnering meaningful revenues. We eventually came to a startling realization that a major discrepancy exists between the purported size of SBAY’s workforce versus what we determined to be physical limitations due to the lack of office space and/or non-existent offices and employees altogether.

Our investigator visited Subaye in Guangzhou on the morning of March 8, 2011 where he spoke to one maintenance individual who works at the facility and two employees of a car wash company adjacent to SBAY. Our investigator also visited SBAY’s claimed facility in Beijing on March 22, 2011, where he was unable to verify the presence of a workforce at this facility. Our investigator took several pictures of the Guangzhou and Beijing facilities. We also conducted extensive internet research on SBAY and pulled the company’s SAIC filings as well as those of an associated company, Guangzhou Aixi Software Co., Ltd.(“Aixi”).

Based on our investigation, we alerted our readers on March 7, 2011 to tread cautiously when considering an investment in SBAY. We also disclosed that we established an initial short position in the company’s shares as a result of our findings. On March 15, 2011 we published more information regarding our findings.

Per its fiscal 2010 10K, SBAY has the following corporate structure: 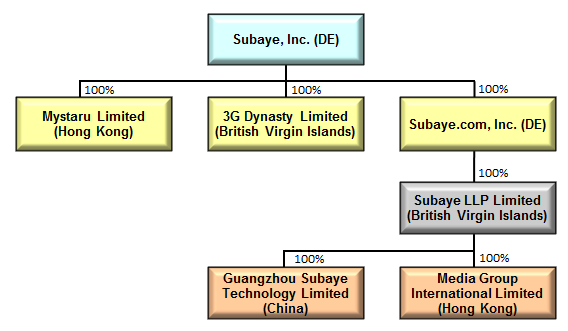 For the address of Guangzhou, Guangdong, we did not find any information confirming that this address pertains to SBAY.

From the official SBAY website (subaye.com) and online information in China, the address of SBAY is No. 74, QiaoShaNan Road, Panyu, Guangzhou, Guangdong and the telephone number on the website with this address is 020-3999-0266. The same phone number is also used in the SEC documents of SBAY even though these documents never disclosed the above-mentioned address in Panyu Guangzhou.

Our investigator visited the address mentioned on SBAY’s website and confirmed that SBAY does have its operations there. The pictures of SBAY’s Guangzhou facility are enclosed. (See Supplementary Material)

Our investigator also visited the address of SBAY’s Beijing facility. However, SBAY and/or Aixi (the relationship between SBAY and Aixi is addressed below) do not appear to exist (no signs and/or name tag) at this address, even though we did see some SBAY and/or Aixi recruitment news referencing that address. After that, our investigator called SBAY Guangzhou (the telephone number in the SEC documents and the website of SBAY). The front-desk told our assigned person that SBAY only had one accountant in Beijing and did not have any substantial business at the claimed Beijing address. Pictures of the alleged Beijing facility are also attached. (See Supplementary Material)

Statements relevant to Aixi (as stated in SEC documents):

“On October 25, 2010, the Company entered into a letter agreement with Metro Fame Properties Limited (“Metro Fame”), pursuant to which the Company acquired all of the assets of the online business-to-business web property, aixi.net (“Aixi”), from Metro Fame in exchange for 1,495,585 shares of the Company’s common stock. As of October 25, 2010, Aixi had a total of 42,731 users of its business-to-business website. Aixi’s website has been operating for four years. The users have previously not paid Aixi for access to aixi.net. Aixi’s 42,731 users have been identified by Subaye as potential customers of Subaye’s bundled cloud product.”

However, during our investigation we found that the relationship between Aixi and SBAY is more complex than the disclosure made by SBAY.

Furthermore, the Beijing address of SBAY mentioned in the SEC documents is also used by Aixi as its Beijing office in the internet recruitment news of Aixi.

In the SEC document, SBAY claimed that:

“On February 1, 2009, the Company entered into a lease agreement to utilize approximately 22,000 square feet of office space at 349 Dabei Road, Shiqiao Street, Panyu District, Guangzhou City, Guangdong, China 511400 for approximately $9 thousand per month through January 31, 2011. This lease was terminated by Subaye in accordance with the lease agreement as of September 30, 2010.”

Based on the SAIC information, in the period of time from Jan 20, 2009 to July 14th, 2010, the registered address of Aixi is the address SBAY claimed to have used in the same period of time.

Based on the information we have so far, we do not know the real relationship between Aixi and SBAY. However, we know that SBAY and Aixi share the same office building and the same staff. On the outside wall of the Guangzhou facility, there is one sign for Aixi and one sign for SBAY. Furthermore, Aixi is in the business of software development, which is similar to SBAY’s business.

In SEC documents, SBAY claims that:

“As of September 30, 2010 and 2009, we had a total of 1,539 and 311 employees, respectively. The chart below provides a general breakout of our employee ranks as of each of the two most recent fiscal years.”

However, on the morning of March 8, 2011, there were only 41 people, including two cleaners, two drivers and one door guard who went into the office building of SBAY and Aixi. Our investigator talked to one maintenance individual of the Guangzhou facility, who told him that SBAY and Aixi share the same staff and that the total number of employees is only around 50. The same person also said that she could not confirm if SBAY had any other facility. Our investigator also talked to two employees who worked for a car-wash company adjacent to SBAY’s facility. These people confirmed that SBAY’s facility has less than 60 employees.

In an online forum (Edisonlao.com), one former SBAY employee said that:

“when I was there, the company had around 100 employees. After that, SBAY fired dozens of people…” (see source)

However, per SEC documents, SBAY claims to have 1,405 sales and marketing employees. This number appears highly unlikely as it is unclear where these claimed employees work.

For the alleged SBAY Beijing facility, our investigator could not find any employees. The front desk person that our investigator approached also confirmed that SBAY has only one accountant in at this location.

Therefore, it is difficult to substantiate SBAY’s claim of 1,539 employees.

SBAY claimed its fiscal 2010 revenues were distributed as follows:

The following tables set forth revenues (in millions) by product for each of the financial reporting periods during the twelve months ended September 30, 2010.

SBAY did not disclose the name of its top customer. In the company’s website, we could only find the annual member fee of the online video service (http://www.subaye.com/User/fuwu.aspx) and could not find any information on SBAY’s claimed cloud products and/or bundled cloud products.

Different from other online video sites, there are not any advertisements on SBAY’s website except for the videos themselves.In an online forum, one former employee of SBAY said that:

“I worked for the company for a while and feel that this company cannot make money. A company that only relies on the RMB 3,650 annual member fee can make dozens of millions USD? Is it possible? It is a joke. There are not any advertisements on the website…how do they make money?”

Unsuccessful Cooperation with Google in China

Based on online information, SBAY cooperated with Google Inc.(NASDAQ:GOOG) in 2008 to promote the Adwords service in China. On its website, SBAY does claim to provide the Adwords promotion service to its members (http://www.subaye.com/User/fuwu.aspx). It is not out of the realm of possibilities that SBAY hired a number of employees for the AdWords business in anticipation of a relationship with Google.

However, due to the dispute between the Chinese government and Google in 2010, the business of Google was interrupted in China. It is likely that the AdWords service cooperation between SBAY and Google was not successful, making these hires unneeded and prompting a trimming of the workforce.

We believe that SBAY has a massive discrepancy in its corporate structure that essentially renders the stock worthless due to our opinion that U.S. investors have no claim to SBAY’s potential revenues and profits.

We cannot envision a reasonable scenario in which SBAY would be able to generate its claimed revenues. Moreover, after looking deeper into the company’s alleged portfolio of “cloud” products, we are skeptical that these products exist in the way that the company has described. We think the most likely scenario is that SBAY played to the hot concept of “cloud” computing as a way to pump the stock in advance of the company’s 2009 equity offering. For these reasons, we believe that investors should continue to approach SBAY shares with extreme caution.

To ensure that the issues we have identified are investigated and appropriately addressed, we have sent this report to Pricewaterhousecoopers, SBAY’s new auditor.

Disclosure: Short SBAY shares a time of this report.

GeoInvesting, its affiliates, and the information providers make no warranties, express or implied, as to the accuracy, adequacy or completeness of any of the information contained in the website. All such materials are provided to you on an “as is” basis, without any warranties as to merchantability or fitness neither for a particular purpose or use nor with respect to the results which may be obtained from the use of such materials. GeoInvesting, its affiliates, and the information providers shall have no responsibility or liability for any errors or omissions nor shall they be liable for any damages, whether direct or indirect, special or consequential even if they have been advised of the possibility of such damages. In no event shall the liability of GeoInvesting, any of its affiliates, or the information providers pursuant to any cause of action, whether in contract, tort, or otherwise exceed the fee paid by you for access to such materials in the month in which such cause of action is alleged to have arisen. Furthermore, GeoInvesting shall have no responsibility or liability for delays or failures due to circumstances beyond its control.