Declining Oil Prices Not A Factor for MNTX Growth Prospects

Revisiting MNTX and Its Improved Fundamentals

On November 17, 2014, we once again assessed Manitex (NASDAQ:MNTX) as a bargain. Here is an excerpt from the e-mail we sent:

We will look to re-establish a position in MNTX before the end of Q1 2015, when we believe the company will be in position to deliver at least four strong quarters of top and bottom line growth. Upcoming Q4 2014 could be a challenging quarter so we will only begin to nibble at a position, building over time as we head into Q1 2015.”

We have now completed our full write up on the company which details why we believe MNTX has immediate 40% upside and why we’ve set a price target of $18. Manitex is a machinery company that provides engineered lifting solutions of all kinds. It operates through two segments, lifting equipment and equipment distribution.

We first put MNTX on our GeoBargain list and alerted our premium subscribers to its story on January 10, 2012, when the stock was trading at $5.29. We subsequently published a bullish article regarding the company on Seeking Alpha in February 2012. Among the reasons for our optimism at the time was that we viewed Manitex as a diamond in the rough that the market was undervaluing, despite its exposure to the energy exploration boom that was taking place in North America.

We sensed an information arbitrage opportunity and believed that once investors made the connection between Manitex and the North American energy boom that the market would quickly mark up MNTX’s shares. Our timing couldn’t have been better: the stock doubled by the middle of May 2012. We removed MNTX from our Bargain list at $10.59 on May 15, 2012 after our price objective was met. The stock did not revisit that price again until February 2013.

It is now nearly three years since our original bullish call on Manitex and we are once again adding shares. We believe the market has been hesitant to reward MNTX’s shares of late for the following reasons:

Just as we saw an information arbitrage opportunity in MNTX shares during 2012, we see similar circumstances today. We believe the market was recently punishing shares on an outdated assumption, while at the same time not fully factoring in the value of two transactions; a substantial acquisition (pending closure) of an Italian company and a major joint venture (closed) with an industry leader. Once these transactions are consummated, MNTX will be operating at a revenue run rate north of $500 million, 90% more than the company’s current operations are expected to generate in 2014 ($265 million). Before going into the particulars of why Manitex has again caught our attention, let’s review what Mantiex does.

Manitex has a lot of legs to stand on, all of which are in markets that are growing. The redundancy and failsafe that comes with a properly diversified company are invaluable traits.

The Lifting Equipment segment designs, manufactures, and distributes boom trucks and crane products that are primarily used for industrial projects and energy exploration, as well as for infrastructure development, including roads, bridges, and commercial construction; and specialized rough terrain cranes and material handling products for the construction, municipality, and railroad industries. This segment also provides rough terrain forklifts for use in commercial and military applications; specialty mission oriented vehicles; and other specialized carriers, heavy material handling transporters, and steel mill equipment, as well as specialized custom trailers and hauling systems used for transporting heavy equipment.

The following chart reflects why MNTX is drawing more investor attention. Since 2009, revenues have grown from $56 million to an estimated $265 million in 2014, a CAGR of 36.7%. 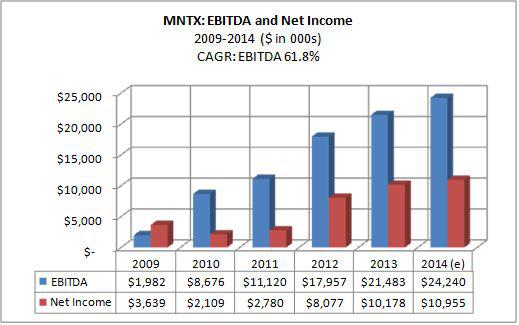 We encourage readers to refer to the company’s Q III corporate presentationfor background history and factors affecting current operations. Page 4 of the presentation offers a company timeline, including key events and acquisitions since 2006.

MNTX recently announced two transformative transactions, one of which has closed and the other is expected to close by year end 2014 (or shortly thereafter). The transactions should add over $240 million to 2015 revenues and around $23 million to EBITDA.

On October 29, 2014, Manitex announced an agreement to form a Joint Venture with Terex Corporation (NYSE:TEX) in ASV, which had been a wholly-owned subsidiary of Terex since 2008. The transaction closed effective December 19, 2014. Manitex owns 51% of ASV and Terex, 49%. The consideration for Manitex’s majority share in ASV is $25 million. In turn, Terex will invest $20 million in Manitex’s common shares and convertible debt (approximately 1.7 million shares at its recent price).

ASV operates a broad product line of compact rubber-track and skid-steer loaders and accessories. The joint venture will extend Manitex’s footprint to new markets, adding to the company’s diverse portfolio of products offered through equipment dealers, worldwide. Total revenue for ASV, Inc. is estimated by management to be approximately $128 million in 2014 with gross margins of (20%) and EBITDA margins of (9%); roughly in-line with those of Manitex.

ASV’s operating results will be fully consolidated with Manitex’s other businesses with Terex’s 49% minority interest deducted from net income. From this, they will derive what is available to MNTX’s shareholders.

PM is a leading Italian manufacturer of truck mounted hydraulic knuckle boom cranes with a 50-year history and a product line of more than 50 models. Its largest subsidiary, Oil & Steel, is a manufacturer of truck-mounted aerial platforms with a diverse product line and an international client base that is not, as some might assume, only Euro-centric. In fact, PM has successfully expanded outside Europe and its eurozone business is relatively small compared to PM’s total operations and global reach. According to management, the company is expected to generate revenue of $109 million in 2014 with EBITDA margins of around 9%.

There are a number of synergies that make Manitex’s acquisition of PM extremely attractive for both companies. First, Manitex will give PM greater exposure in the United States. PM, which currently has no international distribution for its cranes, will have just that upon the closing of the acquisition. Also, longer term, most of PM’s manufacturing will shift from its Italian and Romanian facilities to Manitex’s facilities located in Minnesota and Texas.

MNTX shares were under pressure recently before recovering at least in part due to a perception that the company is overexposed to the energy sector in North America. The market price of West Texas Intermediate (“WTI”) has declined from over $80/barrel in August to the $50’s recently, imperiling many North American producers with production costs that generally range from $40 to $80/barrel. The plunge in the price of oil caused turmoil in financial markets and companies with significant exposure to the energy sector were marked down as investors rushed for the exits.

As noted earlier, one of our original reasons for optimism concerning Manitex in January 2012 was its exposure to the North American energy boom. The rapid expansion of US shale and other exploration projects greatly benefited Manitex, particularly from 2010-2012. Revenue from that sector in 2012 was estimated to be around $50 million, representing over 40% of the company’s total revenue. Energy sector revenue for MNTX, however, has been relatively flat since 2012 while revenues from all other sectors have grown substantially, both organically and through acquisitions. Consequently, MNTX is far less dependent on the energy sector than it previously was.

On a pro forma basis, after including the ASV joint venture and pending acquisition of PM, we estimate that revenues from the energy sector in North America will be less than 10% of our conservative 2015 total revenue estimate for MNTX. Further, even if oil prices remain depressed and the North American energy sector contracts as high-cost and highly leveraged producers are forced out of business, we don’t see MNTX losing more than perhaps $10 million of its existing business (roughly a $900,000 EBITDA impact). In fact, we included a provision for such an erosion of energy sector revenues in our 2015 estimate ($517.5 million).

The following chart reflects our estimate of how Manitex’s 2015 operating results will look on a pro forma basis, including the operating results of PM and ASV. We used what we believe to be conservative assumptions of 5% revenue growth less a $10 million provision for weaker energy sector revenues (to around $518 million) over management’s pro forma 2014 revenue estimate ($500 million) assuming the PM transactions is closed as of the beginning of the year and 9.5% EBITDA ($50.6 million) in 2015. 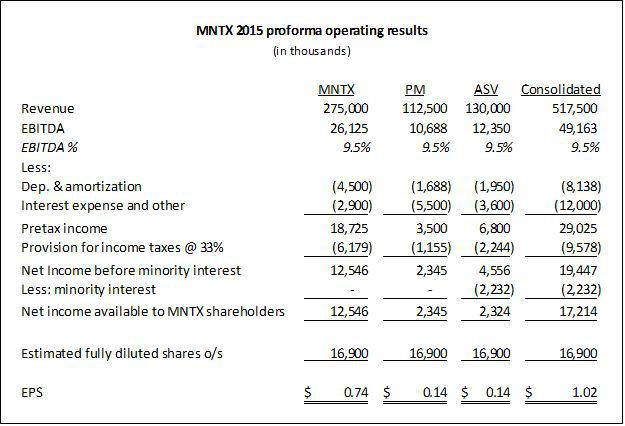 There are a number of risk factors that could impact MNTX’s future operating results that we do not currently anticipate but do acknowledge:

40% Upside Potential Based on Industry Comps

We believe that once the market fully factors in the value of the ASV joint venture with Terex and the acquisition of PM that MNTX could reasonably rise by over 40% from recent trading levels of around $12.70 to $18+. The following chart shows key pro forma 2015 financial metrics for Manitex (on a fully diluted basis), its closest comparable competitor, Terex, and other industry peers.

Manitex does not operate in a high-multiple industry. Gross margins for the company’s peers tend to range from the high teens to mid 20% range. Manitex’s gross margin tends to hover around 19% to 21% and EBITDA of 9%. Investors should note, however, that Manitex has learned to make a profit in a generally weak, lackluster economy. If recent economic conditions are the “new normal” for the industry, the company should do well. If, on the other hand, economic conditions improve more than generally expected, the company should outperform expectations and its share price should inevitably follow. 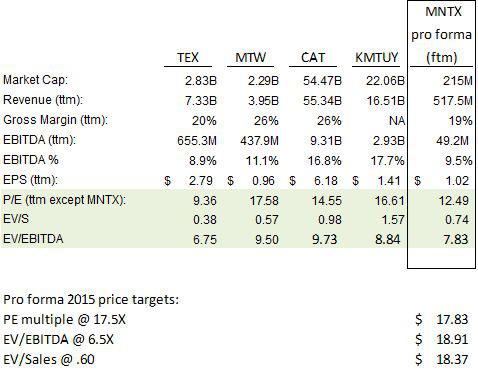