China Auto Logistics Has Pumped And Now Expect It To Dump

China Auto Logistics Inc. (NASDAQ:CALI) is a company based in Tianjin, China that purports to sell and trade in imported automobiles in the People’s Republic of China. We believe CALI offers an opportunity to the short side, as shares have recently seen an influx of volume and a price spike that we believe can be attributed to recent promotion. We believe that shares of CALI will eventually reverse course and wind up heading back towards the $1.20 level, where it traded before the recent move up.

In reality, CALI’s financials are in dismal shape, the company is running out of cash at a rapid clip and it faces significant operating risks which lead us to believe that $1.20 could just be the first support on its way to lower prices. We are also beginning to question CALI’s financial statements presented in its SEC filings, especially given the company’s weak internal controls since 2010. Per the 2010 10-K, the company has stated that is will take measures to rectify material weakness that caused its internal controls to be labeled as not effective. That “promise” has yet to be honored and has been in every 10-K since 2010.

The Pump of China Auto Logistics

Last week, we alerted our premium members of a pump campaign targeted towards CALI. The content of our e-mail on the morning of April 24 stated:

The Small Cap Street newsletter’s latest edition highlighted CALI as the NASDAQ’s number one gainer in yesterday’s trading session, making a seemingly legitimate case for the company based on financial highlights readily available on Yahoo Finance. It’s unclear if the pop was because of their note. As is often the case with possible pump and dumps, the last to “take advantage” of influential alerts are usually the ones left holding the bag. We will continue to follow the price movement of CALI today, as it is obvious that volatility and swings could present short-term trading opportunities on both the long and short side. If we make a move, we will be sure to premium tweet it to keep you in-the-know.

Here’s what CALI’s recent chart looks like, with highlights on the volume and price spikes: 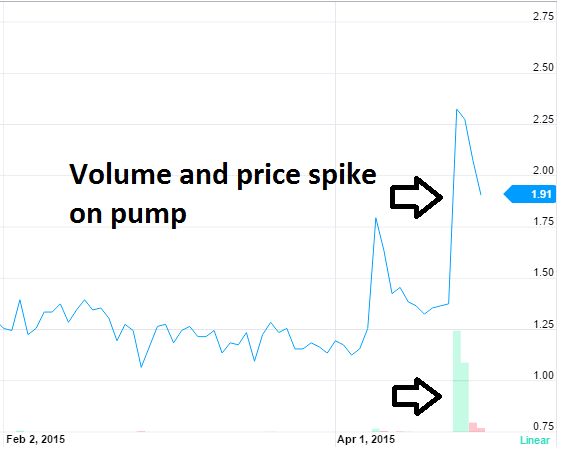 We track the activity of what we consider to be pump and dump newsletters, including The Small Cap Street newsletter, where CALI was mentioned. Besides CALI, we are tracking 26 previous names that The Small Cap Street newsletter has promoted since May 2014 and the results are very telling: as of April 30, 2015, 24 of these stocks are currently below the price of the initial promotion date with an average decline of nearly 50%. 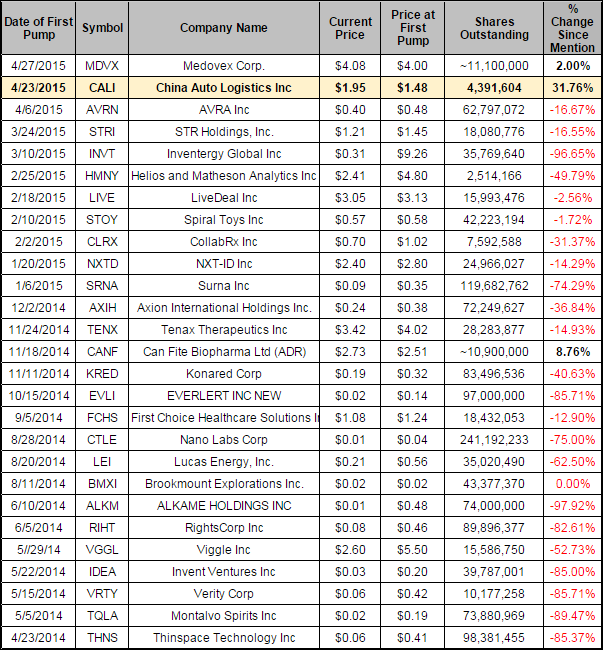 In addition to this, CALI has disclosed in a recent 8-K that it has moved down a tier on the NASDAQ exchange due to its inability to comply with the required “market value of publicly held shares”.

As previously reported on a Current Report on Form 8-K filed with the Securities and Exchange Commission on October 22, 2014, the Company received notification from NASDAQ on October 16, 2014 that for the previous 30 consecutive business days, the market value of publicly held shares (“MVPHS”) of the Company’s common stock had closed below the minimum $5 million requirement for continued inclusion on The NASDAQ Global Market pursuant to NASDAQ Listing Rule 5450(‘b’)(1). In accordance with NASDAQ listing rules, the Company was afforded 180 calendar days, or until April 14, 2015, to regain compliance with the MVPHS Requirement.

Putting the promotional newsletter to the side, we’ve found several other reasons to err on the side of caution

The Company is Running Out of Cash

CALI entered 2015 with a significant operating loss of $21.7 million and negative operating cash flow of an astonishing $54.4 million. Is it just a coincidence that CALI was the fortunate recipient of a promotional campaign as the need to raise capital seems pretty imminent?

Don’t take our word for it that it appears that CALI is in dire need for capital. Management commentary in its 10-K for 2014 filed on April 15, 2015 seems to support this assumption:

“We do not currently have sufficient cash or commitments for financing to sustain our operations for the next twelve months.”

Additionally, CALI is burning an enormous amount of cash. The company’s cash and cash equivalents balance decreased from $44.7 million at the end of FY 2013 to $20.0 million (cash, cash equivalents, and restricted cash) at the end of the FY 2014 year, which translates into a cash burn rate of $2.1 million per month. At this rate, the company will have shed $8.4 million of that $20.0 million since December 31, 2014, putting them on target to run out of cash in just about five and a half months.

To make matters worse, the company still needs to come up with $39.2 million to satisfy the terms of a recent acquisition:

Under the terms of the Auto Mall Acquisition Agreement, Shisheng will pay RMB559,768,000 (approximately $91.4 million) to Hezhong, in four annual installments with an annualized rate of interest of 6%. The initial payment of approximately $39.2 million (RMB240,000,000) was paid within 5 business days after the signing of the Agreement. We made an installment payment of approximately $16.3 million in November 2014 and $3.2 million in January 2015, and have to remit two more installments at approximately $19.5 million each, including principal and interest in November of 2015 and 2016. As of December 31, 2014, we had an outstanding debt balance of $35,144,603.

After turning a profit in 2013, CALI lost money every quarter in 2014. The table below shows CALI’s revenue and adjusted EPS in each quarter of fiscal year 2014: 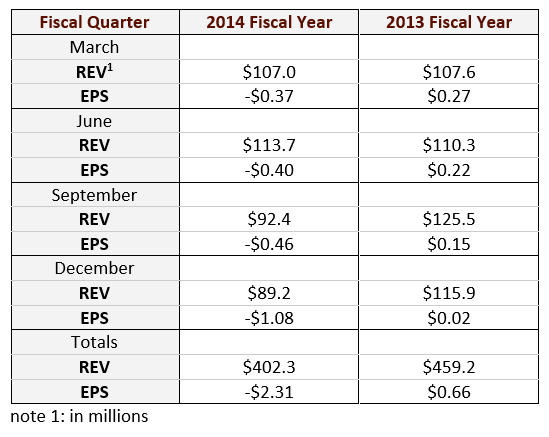 CALI margins are just as horrendous, likely making it difficult to increase its cash position (void of financing activity) even if the company finds some way to revive top line growth; a feat that looks challenging at best.

CALI’s 10-K continues to provide us with ammunition to endorse a near-term short thesis. We believe that there are many things working against CALI’s ability to grow the company. For starters, the company’s negative working capital position might begin to pose a problem, especially given the fact that at the end of 2014, the company’s accounts payable due to suppliers stood at $16.3 million. This is just another reason to believe that CALI may need to raise equity capital sooner rather than later.

“In order to expand our revenues on Sales of Automobiles, we are required to have a significant amount of working capital since our suppliers require deposits for orders.”

Aside from this issue, CALI faces serious headwinds including unfavorable industry and regulatory trends.

“China experienced significant economic growth and overtook the US as the world’s largest automobile market in 2011. According to data issued by the China Association of Automobile Manufacturers, approximately 23.7 million vehicles were produced in China in 2014, an increase of 7.26% from 2013. Approximately 23,491,900 vehicles were sold in China during 2014, an increase of 6.86% from 2013. Even though the Chinese market continued to grow in terms of both production and sales, this market growth slowed to approximately 7% in 2014, from about 14% in 2013. In addition, similar to 2013, the growth in the number of vehicles sold in 2014 was lower than the growth in the number of vehicles produced, signaling a surplus in Chinese automobile inventories.“

“According to data issued by the China Association of Automobile Manufacturers, imported foreign automobile sales continued to show growth in 2014 at a rate of approximately 13% over 2013, but we saw a slowdown in growth in the second half of 2014. In addition, discounts offered on vehicles continued to climb, as high inventories put pressures on sales prices. This phenomenon is a result of the recent economic slowdown in China and increased competition from domestic brand automobiles.“

Regulatory trends from the 10-K:

The local governments of various cities in China imposed restrictions on automobile purchases. Through December 31, 2014, Beijing, Shanghai, Guangzhou, Guiyang, Shijiazhuang, Tianjin, Hangzhou and Shenzhen had adopted such restrictions. The restrictions vary from city to city, however most of these cities set an annual limit on the maximum number of vehicles in each category that may be licensed, in order to limit the number of new vehicles added to the roads each year. Some cities, such as Beijing, have adopted a lottery system wherein only potential buyers who win the lottery draw will be able to purchase vehicles. As more cities become subject to these and similar purchase restrictions, the future growth in the automobile market in China will be negatively impacted. As a result, our future growth may be negatively impacted.

A common theme among failed U.S. listed Chinese stock stories is the prevalence of weak internal controls. While CALI is no different, the related verbiage in its 2014 10-K is outright scary:

Our Chief Executive Officer and our Chief Financial Officer concluded that, as of the end of the period covered by this report, our disclosure controls and procedures were not effective as of December 31, 2014.

The bigger problems are that internal controls have not been effective since 2010 and that the following “promise” (in varying verbiage) has been provided in every 10K between 2010 and 2014:

We are undertaking remedial measures, which measures will take time to implement and test, to address this material weakness. There can be no assurance that such measures will be sufficient to remedy the material weakness identified or that additional material weaknesses or other control or significant deficiencies will not be identified in the future. If we continue to experience material weaknesses in our internal controls or fail to maintain or implement required new or improved controls, such circumstances could cause us to fail to meet our periodic reporting obligations or result in material misstatements in our financial statements, or adversely affect the results of periodic management evaluations and, if required, annual auditor attestation reports. Each of the foregoing results could cause investors to lose confidence in our reported financial information and lead to a decline in our stock price. See Item 9A “Controls and Procedures” for more information.

What is taking so long?

To conclude, our initial due diligence leads us to believe it’s likely that CALI will head back to its $1.20 trading range once the effect of a recent promotion wears off. We think the stock is being supported solely by a recent promotion and that the dwindling fundamentals of the company’s business don’t support a thesis for us where the stock could hold at current levels. Our initial target price is $1.20, which we may re-evaluate upon further due diligence.