Investor Riley Ireland provides his investment thesis for this explorer with gold properties in Canada.

"Undervalued" is a term thrown around a lot these days, especially when it comes to the resource mining sector. Unfortunately, most of these so-called "undervalued" plays are undervalued for a reason and eventually turn out to be nothing more than promotional hype and paper selling. News releases are commonly packed with buzz words like "visible gold" and "high-grade," which temporarily attracts the attention of retail investors in droves while creating a chart that would compete with Mount Everest. When the hype dies down, investors are left wondering what happened to those supposed high grade and visible gold as the marketing fizzles out along with their investment.

X-Terra Resources Inc. (XTT:TSX.V; XTRRF:OTCMKTS; XTR:FSE) is an undiscovered gem that has made its own discovery recently in New Brunswick. In addition, the company will carry out exploration and drilling in the coming weeks at its Troilus East property, which is right next to Troilus Gold Corp. ($TLG.TO; Market Cap: $103 million). The program is already fully funded through investments by Fonds de solidarité FTQ and SIDEX, société en commandite, so no financing is expect...

Shares of Myovant Sciences traded 40% higher after the company reported that it has submitted a New Drug Application to the FDA for once-daily relugolix combination tablet for the treatment of women with uterine fibroids.

The company' CEO Lynn Seely, M.D., commented, "An estimated five million women in the U.S. suffer from symptoms of uterine fibroids, which may include heavy menstrual bleeding, pain, and anemia—yet effective non-invasive treatment options are very limited...If approved, we hope to redefine care for these women with relugolix combination tablet, a potential new treatment that demonstrated a predictable and clinically-meaningful reduction in menstrual blood loss while maintaining bone health in the Phase 3 LIBERTY program."

The company highlighted in the report that "the NDA is supported by positive data from two Phase 3 studies and a long-term extension study, demonstrating sustained reduction in heavy menstrual bleeding while maintaining bone health through one year, and that if approved, relugolix combination tablet would be the first once-daily, oral treatment for women with heavy menstrual bleeding associated with uterine fibroids in the U.S."

The firm additionally pointed out that this NDA is the third such regulatory application it has submitted this year noting that it filed a Marketing Authorization Application to the European Medicines Agency in uterine fibroids and an NDA in advanced prostate cancer.

The company explained that "uterine fibroids are noncancerous tumors that develop in or on the muscular wa...

We hit the jackpot with this one, so it was a bit silly of me to say that traders might want to think about taking some money off the table on Friday morning—silly because the Montalva solar energy project deal that Greenbriar Capital Corp. (GRB:TSX.V; GEBRF:OTC) has done with PREPA (Puerto Rico Electric Power Authority) is going to end up being worth about C$10 a share, and I've heard it said that it could be a $17 stock. The deal now moves on to final approval by the Puerto Rico Energy Bureau (PREB) and the Puerto Rico Financial Oversight and Management Board (FOMB). This process is expected to last two to three weeks (from now) and should be a mere formality, a rubber stamp job. 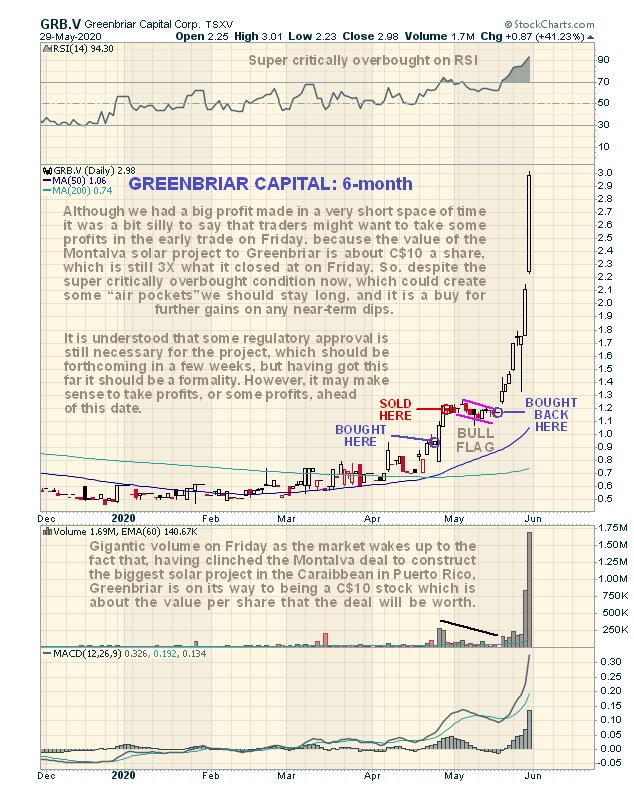 We bought the stock back at the perfect entry point 2 weeks ago as it completed a bull Flag, since which time it has accelerated into a vertical ramp on news of the deal being clinched, as you will see on the latest 6-month chart shown above. With this deal being worth approximately C$10 per share it is clear that the stock is probably on its way to this level, however, that said, we can expect to see some jitters and profit taking in the days leading up to the final approval, so we will keep an eye on it and "play it by ear" as this time approaches. Since it is already super critically overbought on its RSI indicator after Friday's big jump, we can expect it to hit some profit taking "air pockets" from now on, and anyone who wants in or wants to add to positions should do so on any larger intraday dips, but as the date of final approval approaches in a couple of weeks we may look to take profits.

Sector expert Michael Ballanger bemoans the panic-inducing influence of politicians and the influx of "counterfeit currency" from central banks on the money and commodities markets.

One look at the chart of the U.S. financial markets against the backdrop of economic paralysis and suffering, and one is immediately filled with a myriad of emotions. Sympathy for those that have been afflicted by the most recent pandemic; fear for the families whose primary breadwinner is now unemployed; confusion toward the proper course of action going forward; and finally outrage at the abject timidity of our citizens in responding to the orders laid down by these insipid politicians in response to the crisis.

As the welfare of future generations hangs in the balance, its tentativeness the direct result of government ineptitude, I keep asking myself a critical question: "When did the backbone of our people turn to mush?" If someone holding political office had told my grandfather to stop ploughing his fields or tending to his livestock because a sickness was spreading throughout the community, that charlatan would have wound up with buckshot adorning his gluteus maximus. How dare any group of elected bureaucrats ordain the shutdown of an economy? Telling citizens to "stay home" and "avoid contact" was tantamount to telling my grandfather to cease and desist in providing for his family. That he should shutter the ploughs and the reapers and the milking stations, that his sons and daughters need not feed the chickens or slop the hogs because the government was going to "protect them" from harm? Well, not only would promises like that go unheeded by the generations that preceded us; they would be treated with the utmost of distrust and the vilest of response.

The reason that citizens of North America fled Europe and the British Isles to become settlers in the New World was because acceding to governme...

Is Colombia the Latest Gold Exploration Hotspot? FenixOro Gold Thinks It Is

Peter Epstein of Epstein Research profiles an explorer in Colombia with a project on the same prolific gold belt as Buriticá.

The importance of good community relations and avoiding serious outcomes from bad environmental stewardship is paramount. Moreover, in the age of COVID-19 and a 7-year high in the gold price, investors are increasingly interested in countries with abundant mineral resources, that are not among the top producers, countries like Colombia. At the same time, due to COVID-19, local communities will be in need of good, longer-term, high-paying jobs.

Although Colombia remains riskier than the U.S., Canada or Australia, most of the country is considerably less risky than at least three of the world's top six gold producing countries—China, Russia and Indonesia. Colombia has a globally significant endowment of potentially mineable metals, yet has been woefully under-explored.

The ability of foreign firms to safely conduct mining activities in Colombia is improving. The newly elected federal government is pro-resource development as a means of accelerating government royalty revenue. For example, it is spearheading a national US$25 billion infrastructure program building roads, highways, bridges and tunnels to improve logistics throughout the Andes.

Viewing page 1 of 3|Next Page